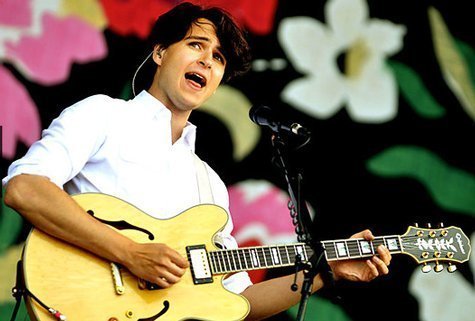 Vampire Weekend did a head to head dj set for My Playlist on BBC Radio 1 which they called "Hot Summer Night" soundclash. The band was split between the red team (Rostam Batmanglij and Chris Baio) against the blue team (Chris Tomson and Ezra Koenig).

The hour long set consisted of them joking and telling stories of their summer experiences, their band's formation and other random summer-like thoughts. The song selection is rooted in what they feel are great songs for the summer, top songs for the summer and songs that they know will score some points with their imaginary audience.

From Animal Collective to Ke$ha, the band members chose a fitting arrangement of songs that everyone can enjoy. Check out the official BBC Radio 1 page with the Vampire Weekend DJ set.

"Joy (Part 1)" - Isaac Hayes
"Summer In The City" - The Lovin' Spoonful
"Lose Yourself To Dance (feat. Pharrell)" - Daft Punk
"Blurred Lines (feat. Pharrell Williams)" - Robin Thicke
"Killing In The Name" - Rage Against the Machine
"Unbelievers" - Vampire Weekend
"Caress Me Down" - Sublime
"Summertime Clothes" - Animal Collective
"CROWD NOISE" - Chris Goldfinger
"You Don't Love Me (No, No, No)" - Dawn Penn
"Why Can't We Be Friends?" - WAR
"Blah Blah Blah" - Ke$ha
"We Are The Champions" - Queen