Chance Martin, former stage manager and lighting director for Johnny Cash, made an expansive, genre-hopping record in 1981. He wrote it on Cash's Martin D35 and produced the LP with a full band. It had a very limited release of 1000 copies then, but has languished in obscurity until now.

Recently picked up by Paradise of Bachelors, the record is slated for a full-fledged reissue July 16th, including CD, digital, and vinyl versions.

In Search, is a sprawling blend of psychedelic and country, with equal parts of harmonica and trippy organ sounds, with some arbitrary disco thrown in for good measure. Martin's vocals are inconsistent, but often sound like Johnny Cash doing his best Frank Zappa impression. The record doesn't flow as smoothly as it could with skippable tracks like "Love By Chance" (Get it? His name is Chance!), but returns to solid ground with songs like "Blue Monday" and "Too High To Land."

Overall, In Search is a perfect example of the time in which it was created. You can hear very clear influences in his style, the bulk of which are likely due to touring with Johnny Cash throughout the seventies. Says Martin of the record: "I consider [recording] it the greatest time of my life. Nothing stands above that to me. I wish I had a time machine so I could go back and relive some of those sessions. I guess the closest thing I'm doing is listening to it by myself, riding in the country in my car. It's like watching a slideshow. I can actually see and hear things. It's almost like I can hear voices sometimes talking to me. And that'll always be with me, and I treasure that." 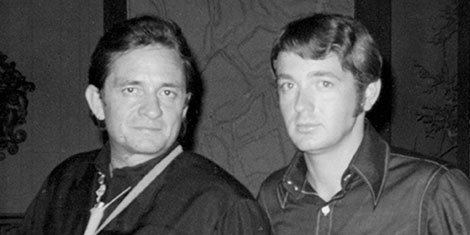 Check it out above. It's an amazing piece of musical history that's getting another chance. (Get it? His name is Chance!)