Several rock heavyweights, including Nirvana, Soundgarden, Alice in Chains, and others, emerged onto the scene in the 1990s. While those groups dominated the radio and TV channels, there were many who stayed relatively out of the spotlight, yet still had an impact. One of those bands is Quicksand, who released their first two studio albums in 1993 and 1995. Fast forward 22 years, and the band has shared Interiors, their inaugural LP for Epitaph Records.

Featuring Walter Schreifels on vocals and guitar, Tom Capone on guitar, Sergio Vega on bass, and Alan Cage on drums, Quicksand have retained their familiar grunge-rock sound on Interiors, while also demonstrating a maturity in their songwriting. The album's three opening tracks hit you with aggressive guitars and thunderous drums before the 47-second instrumental track ">" blends seamlessly into the spacey "Cosmonauts."

Quicksand return to their heavy side with "Fire This Time" and "Feels Like A Weight Has Been Lifted" before taking a breather with ">>." The final two songs, "Sick Mind" and "Normal Love," close out the 12-track LP in true rock fashion with skilled drumming, thick bass, and weighty guitars.

It has been a long wait, but Interiors is certainly worth it. Quicksand showcases a newfound versatility in their songwriting while still capturing their unique sound that longtime fans will recognize.

Songs we like are "Illuminant," Under the Screw," "Interiors," "Cosmonauts," and "Fire This Time."

Pick up Interiors on Amazon. You can also stream it for free above, via Spotify.

The band will begin a European tour later this month. For concert tickets and more, check out Quicksand's Zumic artist page. 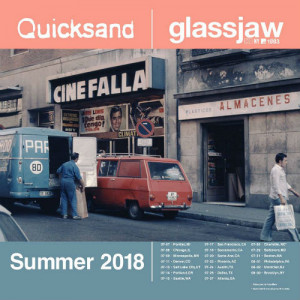 Quicksand Plan 2017 Tour Dates: Ticket Presale Code & On-Sale Inf...
Tickets Grunge Metal No Joy Quicksand Canada United States
1
1027
Back to top
You must be logged in to upvote things.
Registration and login will only work if you allow cookies. Please check your settings and try again.