"Intersections" - Into It. Over It. [Spotify Album Stream]

Intersections, the second studio album of Chicago-based indie emo rockers Into It. Over It has been released on Tuesday and is now streaming on Spotify. The sophomore release shows much polish from frontman Evan Weiss' previous works and still holds to his brilliant songwriting and lyrical prowess.

Few people could accuse Weiss of being lazy. Having just released the first untitled EP with midwest-emo super trio Their/They're/There in May (with Matthew Frank of Loose Lips Sink Ships and Mike Kinsella of American Football and Owen), touring nigh-constantly with them, and touring with Into It. Over It. on his own time, it is surprising to think there was any time to record a full album.

Thankfully, there was, and the album positively reflects the band's current sphere of influence, connecting pop rock sensibilities to catchy, emo guitar riffs that manage to evoke the musicianship of genre classics like American Football, with a mostly upbeat feeling.

Intersections opens with "New North-Side Air," featuring a jumpy math-rock tempo (6/4, if I can count) and crescendos into an Elvis Costello styled hook in the bridge, singing "Hi, How are you? Do I know your name?" up and down the register harmonized with the sweeping guitars.

"Upstate Blues" sounds perhaps the most influenced by Weiss' Their/They're/There bandmate Mike Kinsella, mixing a quiet acoustic guitar rhythm with overlaid electric guitar riffs in a way that is pleasantly inspired by Kinsella's Owen. This is followed by "No Amount of Sound," which throws away all pop sensibilities to create the darkest and most memorable turn on the album. The slow crashing drums, droning feedback and heavy chords contrast the previous tracks on Intersections, and the lyrical exhale of "No amount of sound could make us fade the way you're fading now" is sung in quiet exasperation. Altogether, the song's bleak tone stands out especially among an album about the difficulties of growing older.

Weiss' musicianship and attention to detail shines as a great example of the still-thriving Chicago indie scene. As a person who seems to take great pride in constantly releasing quality music, it will be interesting to see where he takes Into It. Over It. in the future. For now, Intersections is a very enjoyable sophomore album from a band that never disappoints.

Order the album from iTunes or from the band's list of physical retailers. 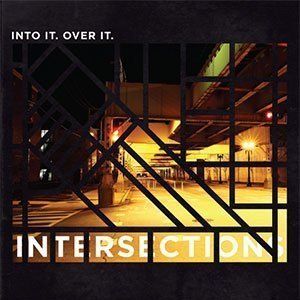