"It's A Queens Thing" is the second track that has debuted off of Tony Touch's upcoming project The Piecemaker 3: Return of the 50 MCs, after last Friday's "Unorthodox" with Raekwon, JD Era, Ghostface Killah, and The RZA.

Action Bronson is a busy man these days. Yesterday we heard a remix of his "Strictly 4 My Jeeps" featuring LL Cool J and Lloyd Banks.

This instant Queens-anthem features production by Statik Selektah and a verse by Queens' rap veteran Kool G Rap, who Bronson has many times cited as one of his musical influences - most recently in Action Bronson's full page feature on XXL's 2013 Freshman List.

The album is scheduled to drop July 9th. Check out the single artwork featuring New York City bootlegger and Mafia boss Frank Costello, who's laid to rest at Saint Michael's Cemetery in Queens. 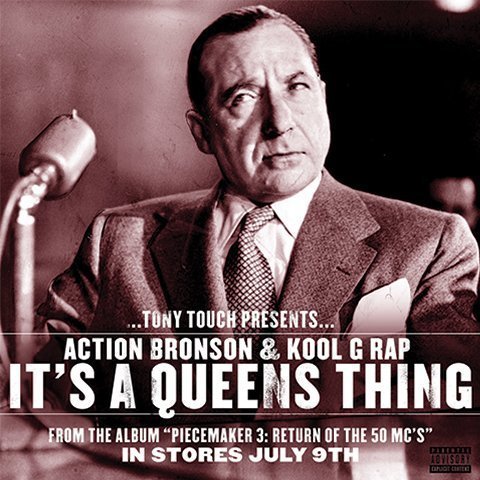