Music's biggest power couple is apparently under investigation by Republican members of Congress Ileana Ros-Lehtinen and Mario Diaz-Balart for their recent trip to Cuba. Hova and Beyonce were in the country with their mothers celebrating their fifth anniversary and the Congress members want to know what kind of license the pair obtained for their travels. 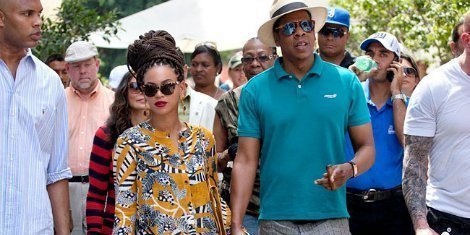 The U.S. trade embargo against Cuba prevents Americans from traveling to the island without a license granted by the U.S. government, although President Barack Obama's administration has eased restrictions on travel to Cuba for academic, religious or cultural exchanges. Both Ros-Lehtinen and Diaz-Balart represent districts in south Florida where there is a large Cuban-American population and in a letter to Adam Szubin, director of the Office of Foreign Assets Control, the Florida Republicans stated:

"Despite the clear prohibition against tourism in Cuba, numerous press reports described the couple's trip as tourism, and the Castro regime touted it as such in its propaganda. We represent a community of many who have been deeply and personally harmed by the Castro regime's atrocities, including former political prisoners and the families of murdered innocents. Cuba's tourism industry is wholly state-controlled," Ros-Lehtinen and Diaz-Balart wrote. "Therefore, U.S. dollars spent on Cuban tourism directly fund the machinery of oppression that brutally oppresses the Cuban people."

A spokesman for the U.S. Interests Section in Havana said she did not know if the couple had obtained a license for the trip but if they did not, they could be subject to fines.

Jay-Z and Beyoncé 2018 Tour Dates Set and Tickets Now On Sale
Tickets Hip Hop Pop Beyoncé Jay-Z
9
19365
Back to top
You must be logged in to upvote things.
Registration and login will only work if you allow cookies. Please check your settings and try again.