Kanye West started his Yeezus tour in Seattle on Saturday night, and the most talked about moment was when an actor came on stage dressed as Jesus and Kanye acted out a short skit. Kanye started, "Oh shit, I can't believe it..." which made fake Jesus respond "I didn't come here to make bad people feel good. I came here to make dead people alive, to show people the light... the light of truth and beauty." Afterward, Jesus slowly departed the stage as Kanye dropped to his knees and proceeded to do his first big hit song as a rapper, "Jesus Walks."

Reactions at the show were mostly positive. One audience member can be heard screaming "Jesus is black!" but for the most part it appears that the audience bought in and was on board with the unusual skit between songs. It's also an interesting stage set up for an arena show, with a triangular platform in the middle of the crowd. Spoiler alert for fans who may want to be surprised at the show, Fact magazine has some cool pictures of the stage show.

Stay tuned for more information about Kanye West on Zumic. 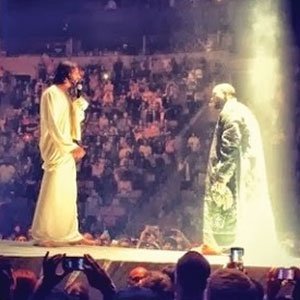