In an interview on Power 106 in Los Angeles, Justin Bieber said that he will retire after his next album. Sadly, this isn't true. Watch the video:

Bieber says "actually, I'm just messing around" about 15 seconds after the video ends. Of course, Power 106 used that short snippet on YouTube as a publicity stunt and it's been reported by other websites too lazy to find the full audio. Check out the full Justin Bieber interview on Power 106 on Big Boy's Neighborhood:

This is the ugliest side of pop music. It has nothing to do with music. It has everything to do with manipulating people. It's based on blatant lies. Of course, Bieber's young fans took to Facebook and Twitter to voice their sadness. The truly sad thing is that this guy is going to continue making millions of dollars off of children who love him and can't understand that he's a terrible person who makes terrible music.

Bieber also talks about his breakup with Selena Gomez, tattoos, and the details of his next album.

For the latest Justin Bieber news, music, and tour dates, check out his Zumic artist page. 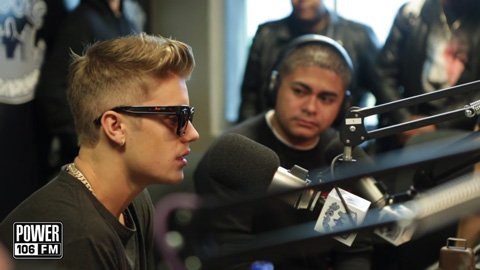