Kanye West Declares "I Am Shakespeare In The Flesh!" & Freestyles on Sway In The Morning [YouTube Video]

The Kanye West promotional tour continues through New York City, with perhaps his craziest interview yet. Doing Sway in the Morning on Shade45 Satellite Radio, Kanye made headlines for yelling repeatedly at Sway "You ain't got the answers!" and doing a freestyle over Nine Inch Nails' "Closer" that contained no rhymes. Watch the full 34 minute interview above.

Things start on a positive note, as Sway gives a very long and complimentary introduction for Kanye. From there, it's an interesting discussion about Kanye's early career as a producer and beatmaker who was heavily inspired by A Tribe Called Quest and the '90s golden age of hip-hop.

At the 17 minute mark, Kanye begins to fly off the handle. He calls out Nike CEO Mark Parker for what he considers mishandling of his sneaker designs in distribution negotiations, but says that he'd take an investment in DONDA which he previously had stated is "like the NBA of creativity." This leads to the most interesting part of the interview:

"I am Warhol! I am the #1 most impactful artist of our generation! I am Shakespeare in the flesh! Walt Disney! Nike! Google! Now who's gonna be the Medici family and stand up and let me create more? Or do you wanna marginalize me until I'm out of my moment?!"

When Sway asks "Why don't you empower yourself and don't need them and do it yourself?" Kanye explodes and yells "You ain't got the answers" at Sway a total of about 9 times. Eventually, the situation diffuses and Kanye reveals that he's lost 13 million dollars trying to create a clothing line by himself.

There's a peculiar moment when Kanye says "we all slaves" 3 times, then says "I sat in Paris and met with these people, I invested my own money and lost money" which is a very loose conceptual understanding of what "slavery" is.

Kanye gets angry that he's #6 on MTV News' Hottest MCs in the Game VIII list, which he thinks is because he was wearing a kilt. Sway explains that it's because Kanye hadn't put out his most recent material like "New Slaves" and they were basing it off less impressive mix tapes.

At the end of the interview, Sway gets Kanye to do a freestyle which is common for his guests. The freestyle is awkward, to say the least. At 31:08, DJ Wonder plays Nine Inch Nails' "Closer" which Kanye takes a minute to simmer over before delivering an intentionally awful freestyle that of course includes everyone's new favorite catchphrase, "You ain't got the answers, Sway!" 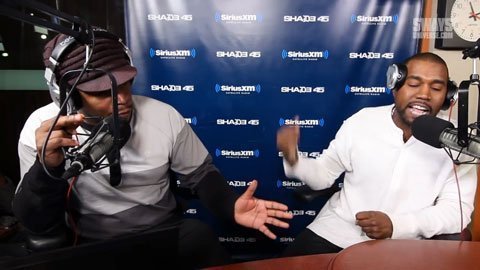