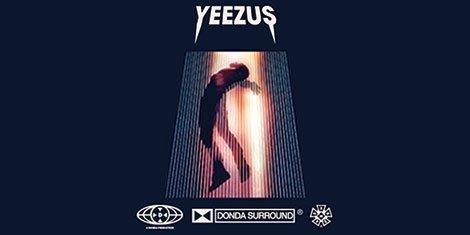 In all, 23 dates have been announced - mostly in large arenas. Tickets go on sale tomorrow for 16 of those 23 shows, although there's no mention of where and how to buy tickets. Ticketmaster and Live Nation only have 11 Kanye West future shows listed on their websites at the time of this publication. Kendrick Lamar's website has no mention of Kanye West and none of the tour dates are listed. Kind of confusing.

Also confusing: Someone has already asked me, "How is this a solo tour if he is playing most shows with Kendrick Lamar?" The answer is that Kanye's last tour was with Jay Z after the two released their Watch The Throne album as a collaboration. This tour, Kanye will be performing solo material even though he's not a solo headliner.

Also confusing: Kanye's website has a 3 images that appear to be knock-offs of professional logos in the film industry, namely the Motion Picture Association of America, Dolby Surround, and International Cinematographers Guild: Local 600. The only logo that is high enough fidelity to be read at kanyewest.com is "Donda Surround" but a Google search on that term yields zero results. Donda is Kanye's newly formed creative agency. Will these shows be in some type of surround setup? Will this be some type of cinematic experience? Is this just a cute little marketing thing?