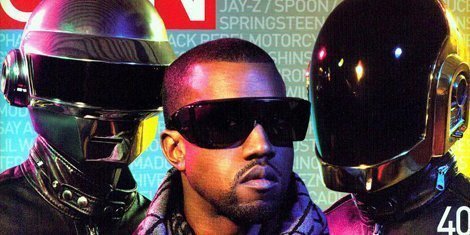 In an interview with Rolling Stone, Daft Punk have revealed that they have worked on two new tracks for Kanye West's upcoming album.

While recording their new album Random Access Memories at their Paris studio, the French electronic dance duo of Thomas Bangalter and Guy-Manuel de Homem-Christo found the time to jam in "a combination of live and programmed drums" with the rapper.

"It was very raw: he was rapping—kind of screaming primally, actually," Thomas shared. "Kanye doesn't give a fuck," Guy-Manuel added.

The band's good friend, French filmmaker Michel Gondry, had one of the first previews of the tracks. "One of them, I told him it sounded solid and powerful—I envisioned a cube when I heard it," he said. According to the filmmaker, a Chris Cunningham-directed music video is already in the works.

Kanye West Adds 'Saint Pablo' 2016 Tour Dates: Ticket Presale Cod...
Tickets Hip Hop Kanye West
1
1013
Back to top
You must be logged in to upvote things.
Registration and login will only work if you allow cookies. Please check your settings and try again.