Before he made a name for himself producing tracks for Jay Z and releasing 2004's The College Dropout, Kanye West was the shining star of Chicago's Kon-Man Productions. Under this enterprise, he brought together fellow Chi-town rappers GLC, Timmy G, and Arrowstar to form the group known as the Go Getters.

While they appeared on the radio and took part in some promo shoots, the group never put out an official album. Now, their full 1999 compilation mixtape, under the name World Record Holders, is available to download online courtesy of Fake Shore Drive. The album deserves a listen and contains the skeleton for the ego-drenched flow that Ye will perfect over the course of his career. Some key tunes include the Dr. Dre influenced "Fight With The Best" and "Never Gon Stop Me" (Whose instrumental has been made famous more recently on Earl Sweatshirt's track "Blade"). Also great are the Southern-fried "Let My Niggas In," and party track "Uh Oh."

Listen to a YouTube playlist containing some of the tape's highlights above, and download the full mixtape on Fake Shore Drive, or by clicking on the album's artwork below - enjoy! 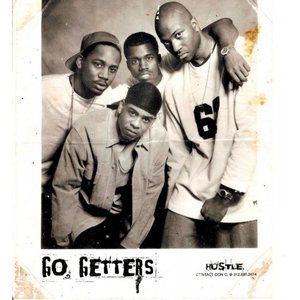