If you could sit down with The Rolling Stones legendary guitar player Keith Richards and ask him anything, what would it be? There isn't much that the 71 year old musician hasn't seen or done when it comes to the rock world. Noisey's resident guitarist Matt Sweeney had the opportunity to sit down with Keith and talk about music, guitars, and a few other topics for an episode of the Guitar Moves series. Watch the compelling two-part interview below.

After the introduction, Keith gives a great piece of advice for guitar players: There's two sides to every story, meaning your rhythm hand has to flow with your fretting hand. He suggests that the acoustic guitar is the most important instrument for a beginner. Paraphrasing Keith:

Learn the feel and the touch of the string and what that does against the fret, learn that and then you can add the effects later on. You wanna be a guitar player, you have to have your grounding. It's like anywhere else. An astronaut doesn't start in space, somebody's got to build a rocket.

Keith shares a really interesting story about his grandfather, a professional musician who played fiddle and sax. In Keith's home, a guitar hung high up on the wall, and his grandfather said if he could reach it, then he would show him some tips as to how to play it. After Keith stacked up books to reach the instrument, his grandfather advised him to start by playing Spanish flamenco piece of music called "Malaguena." In an unexpected moment, Keith picks up a guitar and plays the simple song beautifully and then slowly shows each note in a way reminiscent of The Rolling Stones' "Paint It Black" melody.

He talks about the chords he learned from listening to records all day in his youth, and jokingly confesses that he should have been trying to get laid instead. Again, Keith picks up the guitar to riff on some Jimmy Reed music, who was a heavy influence on The Rolling Stones.

The conversation shifts to The Stones, and Keith reveals how the band wrote music together. He mentions Steve Jordan, who is a co-writer on Richards' new album, Crosseyed Heart. He talks a little about Mick Jagger and shares some laughs while talking about how strict of a bandleader Ike Turner was.

Ending the interview, Keith picks up the guitar again. Removing the low string, he jams on a cross between "Jumping Jack Flash" and a blues shuffle. "And it's cheaper," Keith lightheartedly mentions, "You don't have to spring for the extra string."

It's interesting to note that the interview took place at Electric Lady Studios in New York City, the legendary recording studio built for Jimi Hendrix by Eddie Kramer and designed by John Storyk in 1970. Bob Dylan, John Lennon, Kiss, The Clash, AC/DC, Guns N' Roses, U2, Daft Punk, Kanye West, and Lana Del Rey and many others have recorded there.

Back in September, Keith released his third solo album, Crosseyed Heart. Pick it up on Amazon (Vinyl, CD, MP3). You can also stream the full album and read our review here on Zumic.

For the latest music, news, and tour information about Keith Richards, check out his Zumic artist page. 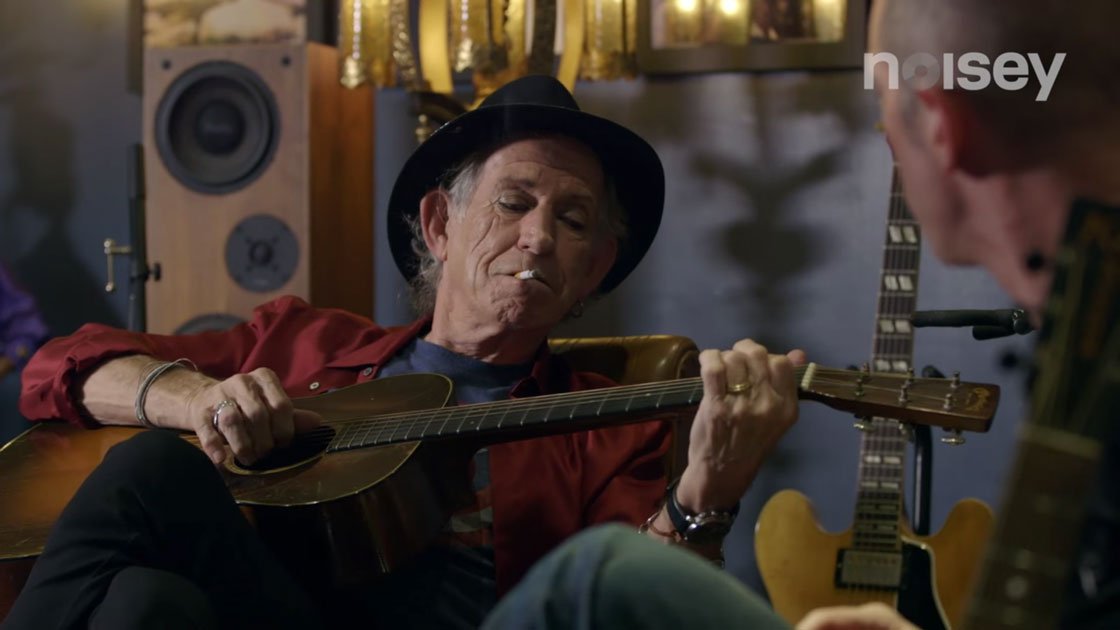