Top Dawgs at it again 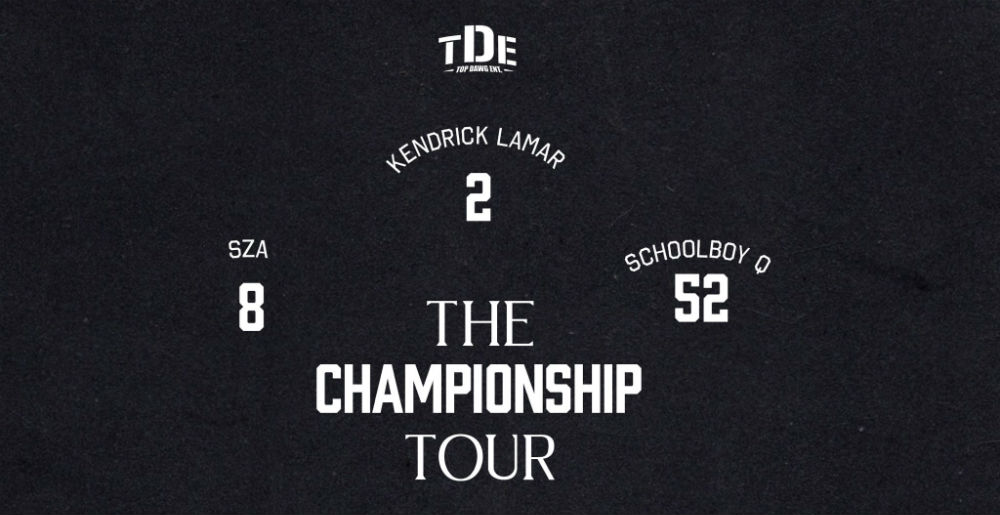 Top Dawg Entertainment has been living up to its name.

The LA-based record label / management company has turned out some of the best hip hop and R&B songs and albums over the past 5+ years with Kendrick paving the way for deals with Interscope Records and Aftermath in 2012 beginning on good kid, m.A.A.d city.  Since then, Kendrick Lamar's albums have all landed on critics choice lists while bringing rare consciousness to mainstream rap.  Meanwhile, Schoolboy Q has proven himself as a truly exceptional artist in his own right and SZA has emerged as one of the most daring and beloved up-and-coming R&B singers.

The general public on-sale begins as early as January 26.  Check the links below for the concert you're interested in, and scroll to the bottom of the article for more information about presales.

When do 'TDE: The Championship Tour' 2018 tickets go on sale and what is the presale code?

Presales begin on January 23. Citi cardmember, Live Nation, LN Mobile App, and local venues / radio presales will follow. Click through the individual concert links for more information about the show you're interested in.

For the American Express presale you can use the passcode INGOLD, but you'll need the card to complete your purchase. The Live Nation presale offer code is ACCESS and the LN Mobile app password is COVERT. Keep in mind, each date is different and details are subject to change.

We recommend following TDE and each artist on their social media accounts and signing up for their newsletters, in addition to checking your local venue's email newsletter and social media, to get the most up-to-date information.

Stay tuned, as we will be updating this page with more information as it is available.

It's also worth noting that the promotional artwork for the tour features a number below each artist's name and a font similar to the New York Yankees.  The number 2 under Kendrick's name is reminiscent of Derek Jeter, while SZA's 8 is like Yogi Berra, Schoolboy Q's 52 is like C.C. Sabathia, Ab-Soul's 5 is like Joe DiMaggio, SiR's 7 is like Mickey Mantle, Skiiiwalker's 13 is like Alex Rodriguez, and Jay Rock's 85 is like... Luis Cessa?  Check out the full artwork below shared on Twitter this morning. 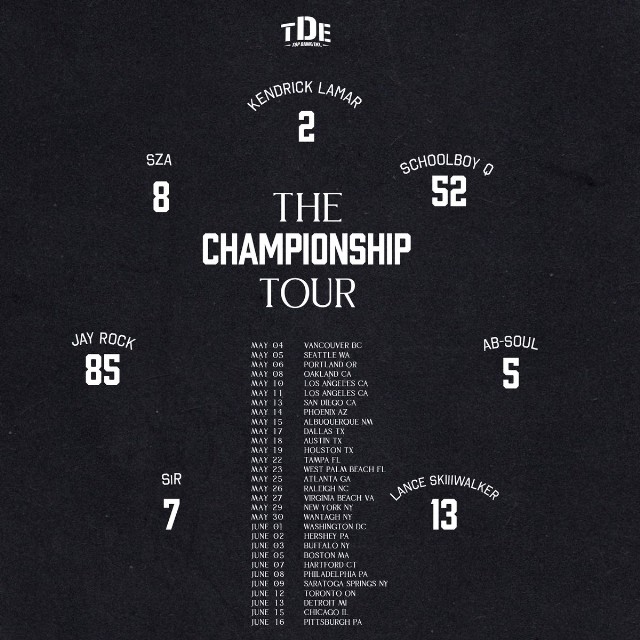