Gunplay enlists the help of Rick Ross and Lil Wayne on his new single, "Kush." The mid-tempo track is an ode to the popular marijuana strain. Lil Wayne raps the chorus, stating "And I got a big bouquet of Mary Jane's flowers...that Kush." Gunplay delivers a great verse, describing the weed's effect. "Lighting weed that's my dope style, eyes lower than my profile," he spits.

His fellow Maybach Music Group member, Rick Ross, compliments the track with witty punchlines about his drug of choice. "Kush in the swisher, couldn't be sweeter... I spark em up in the theater, cloud so thick," he raps smoothly on the beat.

"Kush" should fare well with fans who smoke the substance. This serves as the first single from Gunplay's upcoming debut album, Don Logan, which will be out on Def Jam Records. 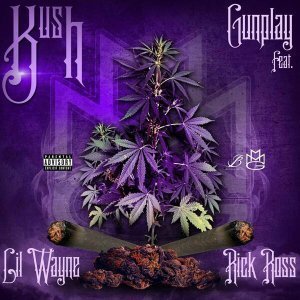 "Tha Carter V"
Lil Wayne (Spotify)
Music Hip Hop Pop Hip Hop Lil Wayne LP
3
1547
Back to top
You must be logged in to upvote.
Registration and login will only work if you allow cookies. Please check your settings and try again.