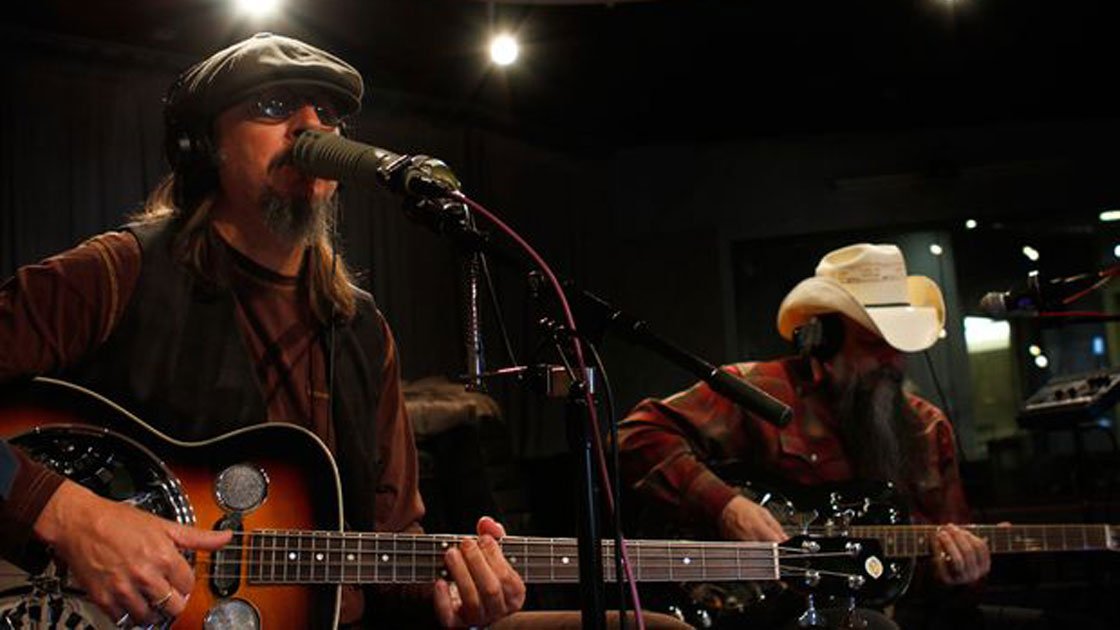 Les Claypool's madcap, country-fried Duo de Twang appeared on WNYC's Soundcheck for a performance and short interview. The duo, Claypool and guitarist Brian Kehoe, play "twanged-out" versions of other people's tunes and songs from a variety of Claypool's projects.

Claypool and Kehoe kicked off the performance with their version of Primus' "Wynona's Big Brown Beaver," and it gives listeners an instant sense of what the project is like. Les' virtuosic bass playing covers both melodic and rhythmic duties, while Kehoe's slide guitar compliments and fills up the song.

The two take a break to talk about their instruments, the evolution of their sound, and their hometowns. Les' dobro bass, he says, was a primary influence in the development of their sound. When he used the bass on a film soundtrack, the twangy sound of the resonator inspired a new project. They talk briefly about their first album, Four Foot Shack, before breaking into their version of "Red State Girl." They pick the interview back up and chat about Claypool's work scoring film and television, including doing the theme songs for South Park and Robot Chicken.

What started as a one-off performance for San Francisco's Hardly Strictly Bluegrass Festival turned into a full record, Four Foot Shack. The album includes a originals, a couple reworked Primus classics ("Wynonna's Big Brown Beaver" and "Jerry Was A Race Car Driver") -- and a few covers like Bee Gees' "Stayin' Alive" and Alice In Chains' "Man In The Box." For a musician frequently shaking things up, Claypool's Duo de Twang is another fun twist.

You can stream Four Foot Shack in its entirety here on Zumic. Also, be sure to check out our live review and photos from their recent show at NYC's McKittrick Hotel.