Organic, Youthful, and Smart, Livingmore Are a Los Angeles Band on the Rise [Zumic Interview]

Sometimes things fall in place naturally as a result of a chain of events that are random, but seem deliberate. Such is the case with Livingmore, an emerging indie rock band from Los Angeles, whose two founders Alex Moore and Spencer Livingston met while attending each other's shows out of mutual admiration.

A few years later, the duo is on the cusp of releasing their debut LP and poised for success, even though the group as a whole is still finding their identity. Their signature aesthetic takes form through Moore’s drifting vocals and Livingston’s tastefully understated command of the guitar. With their sharp sense for craft and an indelible commitment to the human element behind their music, Livingmore has already earned internet notoriety and radio airplay on the strength of their early singles like "Really Mean It," "Never Slow Down," and "Cocoon."

While meeting with the aspiring duo during their recent trip to New York City, it became clear that a completely organic approach to music is a cornerstone of their creative repertoires, and is one of the foremost reasons why the pair believes they work so well together. Livingston elaborated on their process:

70% of time we write separately, then bring the song to each other afterwards, where we’ll kind of like finish each other’s songs. Sometimes I’ll write lyrics to a new song and she’ll add a bridge. There’s a pretty even split of songwriting duties. The other 30% of the time I’ll come up with guitar part and she’ll just sing on top of it. It’s a very natural process, and we never really have a planned session of writing. We just let it happen. We definitely have influences, but we don’t sit down and say hey lets try to write a song like the Everly Brothers.

Livingston and Moore talked about the importance of sheer instinct, a gut feeling that stems from their unabashedly unique personalities, which Moore called “a blessing and a curse” that she has had for her whole life. She shared that she finally feels like she has reached a point of creative catharsis in her work, achieved by “following the things that I personally love” during a game of massive Jenga at Pioneers Bar in Chelsea.

At the core, Livingmore is composed of individuals who are wholly themselves, unafraid to exhibit their genuine vulnerabilities through their art and acknowledge the quirky influences that include but go far beyond Blondie, Garbage, Fleetwood Mac, The Velvet Underground, The Everly Brothers to horror movies and author Steven King. Their wide ranging creative brilliance is energetic and upbeat, with a touch of obscured melancholy. Outside of playing guitar, Livingston's natural proficiency in puppetry can be seen in their recent video for the single “Cocoon.”

Despite their predilection for the relaxed, playful environment of the bar that allowed the duo to untangle a bit from their redeye flight from Los Angeles and rigid touring schedule, there was still an unmistakeable maturity about the band. Moore and Livingston hold no quixotic illusions of making it in the music industry, and instead realistically manage their expectations.

Livingston looks at the band’s future from a logistical perspective, like a blueprint that spells out the details of a long, specific process. He notably doesn’t equate artistic depth with public appreciation, and instead is interested in ensuring that his work is meaningful to him. He explained that the group “just wants to carve out a nice little niche for ourselves somewhere in the giant world of music. We want to release music that always means something to us. There’s no room for filler, everything we do needs to be something we’re really proud of.”

Both Moore and Livingston emphasized their superstitions as well, especially with regard to their upcoming album and the possibility of a record label deal, hesitant at points to make projections on certain aspects of their careers that might seem overconfident. There was also a mixed sense of optimism and disappointment shared by the duo with regard to the music business. They appreciate the opportunities granted to them by modern technology, specifically streaming, while nostalgic for older musical traditions like vinyl records.

Livingmore’s eccentric identity of youthful panache and cautious maturity, being fun-loving yet wary of the future, modestly optimistic about the landscape of music while feeling somewhat artistically displaced in the current generation, is a fittingly modern disposition for the duo to share.

Despite the general areas of concern, the group has a promising future marked by the release of their debut LP, which can be expected sometime later this year. The album, which has been in post-production for the past six months, was recorded at Kingsize Soundlabs in Eagle Rock, California with producer Brian Rosemeyer, an environment that surrounded the band with several noteworthy frequenters including Mavis Staples, M. Ward, and Cass McCombs.

During their first concert in New York City, Livingmore showcased their impressive technical skill set at Union Pool in Williamsburg. The two new members, bassist Rodrigo Moreno and drummer Mike Schadel, radiated with infectious energy and provided spirited precision in the rhythm section. The four band members recently moved into a house together, and it will be interesting to see how they continue to evolve as a group. 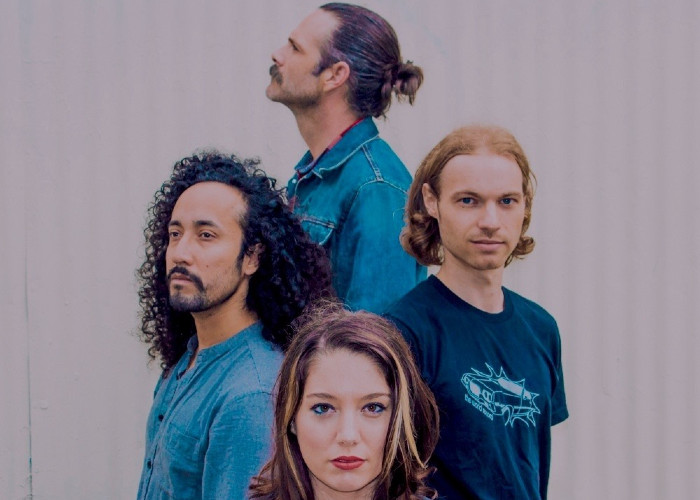