Since the release of his amazingly successful second full-length album good kid, m.A.A.d city, Kendrick Lamar has been touring non-stop. A recent stop in Birmingham, England as a part of his European tour saw the rapper performing arguably the most aggressive track from his release - "m.A.A.d city" - with a full band. Watch above as the sold out crowd at Birmingham's o2 vibes with Kendrick - even fervently filling the gaps in his lightning fast delivery when the hyped-up MC can't seem to catch a breath. 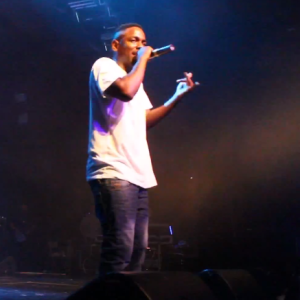 "All The Stars"
Kendrick Lamar & SZA (YouTube)
Music Film/TV Scores Hip Hop R&B Kendrick Lamar SZA Al Shux Anthony Tiffith Sounwave
1
1572
Back to top
You must be logged in to upvote things.
Registration and login will only work if you allow cookies. Please check your settings and try again.