Miley Cyrus' album Bangerz was released yesterday, and she stopped by Late Night with Jimmy Fallon to sing a couple songs, participate in an extended interview, and do some really strange acting. Probably the #1 highlight of the show was a Brady Bunch style a capella version of "Can't Stop" with The Roots and Jimmy Fallon:

Musically, it's a very cool version of the song that stays true do the Mike Will Made It production - no small feat considering all the electronics, samples, and studio wizardry that went into that original version. The video is also notable for the reactions on the faces of the members of The Roots who look at times shocked and disgusted by the blatant drug and sexual references in the lyrics of the song.

The other musical performance was of Miley Cyrus with her band playing the 2nd single off the album, "Wrecking Ball":

During the interview portion of the show, we're reminded of how charming and simultaneously strange Miley Cyrus can be. Wearing a suspenders / bra hybrid over an oversized dress shirt, the singer complained about how cold Fallon's studio was, to which the talk show host replied "It's very cold, but you have to wear clothes when you come on here" to the laughter of the audience. By the end of the interview, Miley was wearing a blanket (but perhaps it would have made more sense for her to put on pants or a skirt). They also talked about her SNL performance, twerking, licking stuff, tattoos, being a child star, collaborating with others, special packaging for the vinyl LP, dressing up, and a "Burrito Burger" hybrid which is apparently only available in Paris, California. The Miley segment on the show ended with a staple of The Late Show, "Real People, Fake Arms." 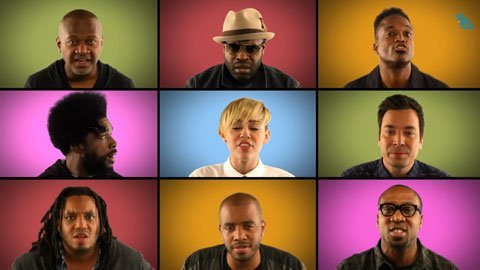 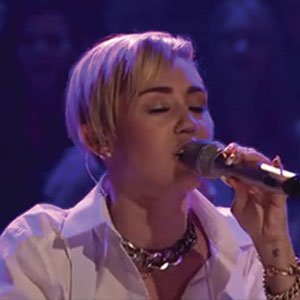 "Younger Now" - Miley Cyrus [YouTube Music Video]
Music Country Pop Miley Cyrus Nashville, Tennessee Official Music Video
1
994
Back to top
You must be logged in to upvote.
Registration and login will only work if you allow cookies. Please check your settings and try again.