Last month, Pearl Jam released the audio for "Mind Your Manners," the first single from their upcoming tenth studio album, Lightning Bolt. Now the energetic song has a music video to go with it. The band performs in front of a screen showing various catastrophes, including devastating floods, forest fires, and bombs. It also has artwork of the Statue of Liberty wearing a gas mask and the US flag enclosed by barbed wire. But in contrast with these natural and manmade disasters, the "Mind You Manners" video also shows healthy green forests and shots of Seattle's Space Needle. The video is as thought provoking as the song itself.

Pearl Jam's new album, Lightning Bolt, will be out on October 14th. You can pre-order it now on the their official site or iTunes. Pearl Jam will also be touring North America from October through early December. Check out dates and tickets on the band's official tour page. 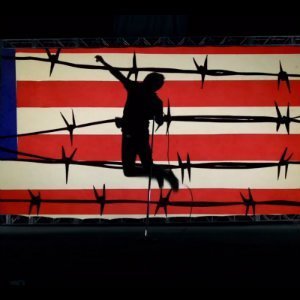