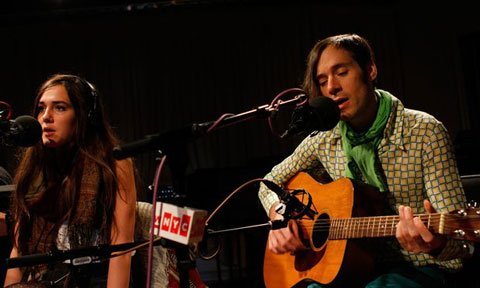 of Montreal stopped by WNYC SoundCheck for a live performance of 3 new songs and an interview with host John Schaefer. Listen above.

After "Fugitive Air," the interview begins with discussion of Lou Reed, who passed away yesterday. Kevin Barnes, of Monteal's frontman, eloquently describes Reed as an outlaw and a genius. They also discuss challenging song lyrics and the meaning of their recent album's title Lousy With Sylvianbiar, and specifically the word "Sylvianbriar," that Barnes created as a reference to Sylvia Plath who "haunted the creation of the record... in a positive way." Barnes talks about how some of his reference points in making the record Lousy With Sylvianbiar were Bob Dylan, early '70s Grateful Dead, and Leonard Cohen. Making a psychedelic folky rock album, those are great artists to draw from.

The band then plays two more songs, "Colossus" and "Raindrop in My Skull" which sound great. Having heard the album several times, I am really enjoying the live performances. The band is very focused and controlled here, playing flawless versions of the challenging tunes.

After those songs, Barnes talks about being influenced by '60s music and recently moving to San Francisco to develop as an artist even though he's already established himself as one of the biggest acts in the indie rock world.

We also get some details about Song Dynasties, which is a film project that had a Kickstarter campaign. Expected to be released in the next year, the film will include video footage of the band over the years.

For more of Montreal music, news, and tour dates, check out their artist page on Zumic.