Ikonika just released her new album Aerotropolis today, and now we have the music video for one of the tracks, "Mr. Cake." The Robert Walker directed video, like the song, is ’80s inspired, and filled with video game noises and a bright summery vibe.

The video stars a female avatar in a bikini who drives through the palm tree-filled city in a red convertible, dances in front of a trippy neon background, pole dances at a strip club, and steals the keys to a private jet from a guy named Mr. Cake. If CSI Miami and The Sims could have a lovechild, it would probably look like this video.

Yet, somehow, this video feels like the perfect extension of "Mr. Cake." It is fun, colorful, electronic, and pretty badass. Though the main woman is hardly wearing any clothing and dances at a strip club, we can tell that she is empowered — we can almost hear the patented CSI Miami theme song as she walks into the sunset to board her new private jet.

In an interview with Fader, Ikonika discusses the old school game music influence in her songs, and specifically, in "Mr. Cake." She says,

"I think it’s slowly moving away from that now, although the video makes it explicit because it pays homage to GTA and Outrun. The dialogues are also in emoji so it’s brought up to date with new technology and newer forms of games, particularly games for mobile devices. Games where you make in-app purchases. Think Sims Freeplay or Line Play. , particularly while flying. I can’t work on planes, I can’t catch up on emails or work on music. I prefer to be entertained, so I’ll play things like Street Fighter, GTA and Bejewelled."

Watch the video for "Mr. Cake" above and stream the rest of Aerotropolis here. 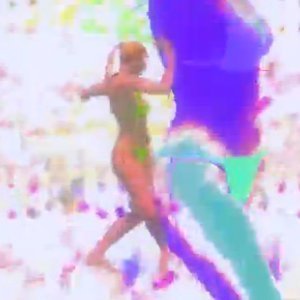