"We Can't Stop" is Miley Ray Cyrus' fun-loving party pop anthem. She doesn't care what we think. She's a girl and she just wants to have fun. So, what better way to express in than a bizarre odyssey of writhing party-goers, listless twerking, and incessant gum chewing?

The original video left several questions unanswered. Among them:

Why were the guests in the pool floating lifelessly in their underwear?

Why was there a skull made of French fries?

What would possess people to put a fire extinguisher between their legs, unless they wanted us to assume something down there was burning?

Why would you make a music video in which you never stop chewing gum?

The above video doesn't answer any of the questions, but it does lend a hilarious edge to an otherwise reprehensible waste of film. By overdubbing their own foley and removing the vapid pop song, the geniuses at CollegeHumor have given a brilliant Lynchian darkness to the video. It is now watchable, and moreover, showcases the dead-eyed sadness that is partying with Miley Cyrus.

Keep an ear out towards the end for the vomiting guy and the sirens. It's the little touches that make something like this so special. 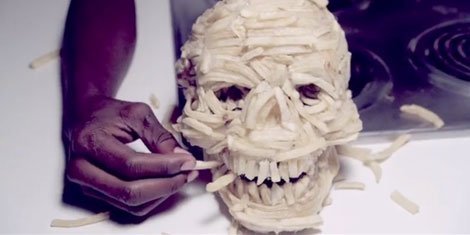 "Younger Now" - Miley Cyrus [YouTube Music Video]
Music Country Pop Miley Cyrus Nashville, Tennessee Official Music Video
1
995
Back to top
You must be logged in to upvote.
Registration and login will only work if you allow cookies. Please check your settings and try again.