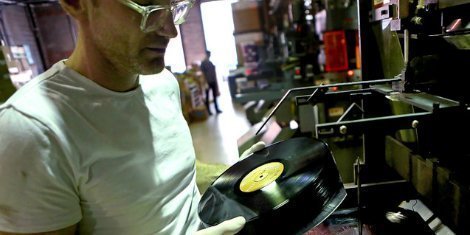 A few decades ago, it seemed that vinyl records were soon to become obsolete relics. The reason? The introduction of the CD in the 1980s, which led to a rapid decrease in vinyl sales. Recently, though, young music lovers have developed a strong appreciation for the tried-and-true vinyl format. It has become the medium of choice for those who want rich, high-quality sound.

The New York Times reports that bands and record companies are responding to vinyl's renewed popularity. All major labels and even many smaller ones regularly issue vinyl LPs. Recently, big names such as Daft Punk, The National, and Vampire Weekend have posted impressive vinyl sales numbers. According to Neilsen SoundScan, Daft Punk sold 19,000 vinyl copies of their much-hyped album Random Access Memories in the first week after its release. In that same week, The National sold 7,000 vinyl copies of their album Trouble Will Find Me and Vampire Weekend sold 10,000 copies of Modern Vampires of the City on vinyl.

The increase in vinyl sales has led to the opening of a handful of new vinyl pressing plants. Although vinyl sales are modest compared to digital downloads, many of these plants are doing a brisk business. Brooklyn Phono, which began pressing records in 2000, manufactures around 440,000 LPs per year, while a larger plant such as California's Rainbo Records manufactures around 6-7 million records in a year. Chad Kessem, who opened Quality Record Pressings in 2011, argues that newly-pressed vinyl is in high demand: "we've always had more work than we could do," he says.

Although the demand for new LPs is high, vinyl manufacturing technology has not kept pace. New presses haven't been built since the early '80s, so startup vinyl manufacturers rely on refurbished machines to create their records. Currently, no new machines are being made, and although some companies have looked into ordering new presses, the price tag (as high as $500,000) usually leaves most companies looking to used machines, which cost around $25,000 on average.

It's no secret that manufacturers are making lots of new vinyl, but the actual sales figures for vinyl records are a subject of some dispute. Data from Neilsen shows an 18% increase in vinyl sales for 2012, but vinyl still only holds a 1.4% market share. It faces stiff competition from CDs and especially from digital downloads. Vinyl manufacturers and retailers are confident, however. They report that in 2012, 25 million vinyl LPs were made in the U.S. alone, and that sales of turntables and other vinyl-related equipment remain high.

For the first time in decades, companies both large and small are producing new vinyl in large quantities. It remains to be seen whether or not the buzz will last, but for now, you might want to dust off your dad's old turntable, because vinyl is back.