New discussion, New York artists wanna be Southern
The city's lost, so out of towners find themselves frontin'
It was Big, Jay Z, now Troy Ave hit after
Kendrick Lamar is just a weirdo rapper

Troy Ave becomes the latest New York rapper to air his grievances with Kendrick Lamar's recent "King of New York" boast on his new single "New York City," which also features NY rap veterans Raekwon, Prodigy and Noreaga. Thankfully, the majority of the track stays away from petty, cross-country shit-slinging, and all of the guests turn out stellar verses. Raekwon in particular shows everyone else on the track that it's still nearly impossible to out-rap a Wu-Tang veteran.

The beat, produced by John Scino, is also a highlight. Soulful backing vocals reminiscent of Raekwon's own "New Wu" hover over a beat determined to return NY Hip Hop to its glory days of boom-bap minimalism.

In case you've forgotten where Troy Ave is from, his new album is entitled New York City: The Album, and features "New York City" (the single). There's no word on a release date for that yet, but Troy Ave's SoundCloud page promises that it will be "NOTHING SHORT OF GREATNESS!" 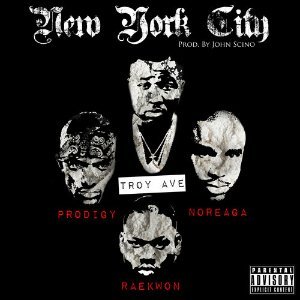