Austin's White Denim has a new, Jeff Tweedy-produced album called Corsicana Lemonade coming out on October 29th. They've already shared lead single "Pretty Green" (and its accompanying video), and now they've followed it up with "At Night In Dreams," posted on their SoundCloud page today.

Like the first single from Corsicana Lemonade, "At Night In Dreams" has a distinctly classic rock feel to it. Unlike almost every other modern band that attempts to rehash that era of rock music, White Denim do it with class. It's the little things -- like drummer Joshua Block's effortless transitions between half- and double-time, and the slight alteration of the guitar harmonies from verse to chorus -- that separate White Denim from the pack of bands who believe that good music died along with John Bonham in 1980.

On the cover of Corsicana Lemonade is what looks to be an extravagant cocktail, which is a fitting metaphor for White Denim's music. If classic rock is vodka, they add a dash of lemon juice (math rock), some mint leaves (jazz), and liqueur (noise rock) to make something much more enjoyable than straight hard alcohol. If other classic rock revivalists aren't careful, they'll go the same route as Bonham -- too much vodka, and a tragically short lifespan. 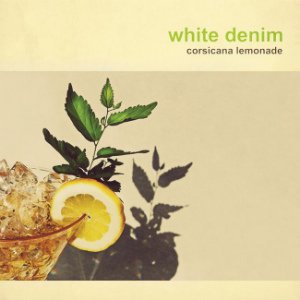