Nimrod, Green Day's 5th studio album, was less aggressive and more experimental than their previous record. It had a pop punk sound more like their earlier work, but rather than staying within their comfort zone, Green Day proved they were willing to try out new sounds and styles. They debuted their first acoustic ballad with the hugely popular single, "Good Riddance (Time Of Your Life)." Mellow and surfy "Last Ride In" surprised many as their first instrumental track, while "King For A Day" featured horns supplied by band members from No Doubt.

The lyrical themes also varied more on Nimrod, as frontman and principle songwriter Billie Joe Armstrong sang about the struggles of growing up, the ups and downs of marriage, and even cross-dressing. At times serious and at others ironic and funny, the album covered a lot of ground in its 18 tracks. Though the album was well received by critics, it was not as commercially successful as the prior two records. Nevertheless, it features some of Green Day's strongest work and the first hints at the stylistic changes that would come later. It's an impressive collection, both in terms of its variety and its consistent quality.

In addition to the hit "Good Riddance (Time Of Your Life)" - now known for its frequent appearances in graduation ceremonies and sentimental on-screen moments - Nimrod also contained numerous other gems. Singles like "Hitchin' A Ride" and "Redundant" were relatable, while deep album cuts like "Haushinka," "Prosthetic Head," and "Scattered" showed Green Day's skill in crafting memorable songs. Nimrod is worth listening to in its entirety, and offers great foreshadowing of what the band would create in later years. 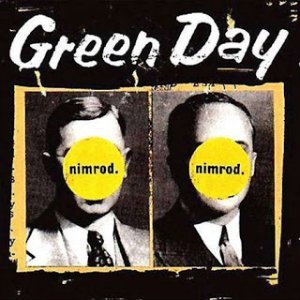 You can buy Nimrod on iTunes.

"Troubled Times" - Green Day [YouTube Lyric Video]
Music Pop Punk Pop Rock Green Day Berkeley, CA Lyrics Video
1
986
Back to top
You must be logged in to upvote.
Registration and login will only work if you allow cookies. Please check your settings and try again.