Arcade Fire dropped by The Colbert Report last night for a special performance as "The Reflektors," a band with all the same members and songs as Arcade Fire, except with giant paper mâché heads. The band's use of the moniker is apparently another layer in their enigmatic marketing, having just played two Brooklyn shows as The Reflektors a few days prior.

Win and Will Butler sat down with Colbert briefly before the performance and had a tongue-in-cheek talk about the differences between The Reflektors and Arcade Fire, the meaning of "Reflektor," and their Haitian influences. As always, Colbert managed to insert a brief moment of seriousness before punctuating it with a joke, asking, “What do you like more? Getting people to listen to your lyrics and think about the message of isolation in modern world, or getting them on dance floor to shake dat ass?”

The band goes on to perform a live version of "Normal Person," featuring a replica of Stephen Colbert's head that's almost as large as his own. Watch the video above and check out the interview and web-exclusive performance of "Afterlife" below.

Reflektor is out October 28th and is available for pre-order at the band's official website. 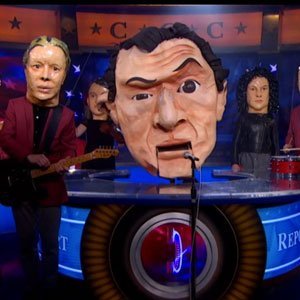