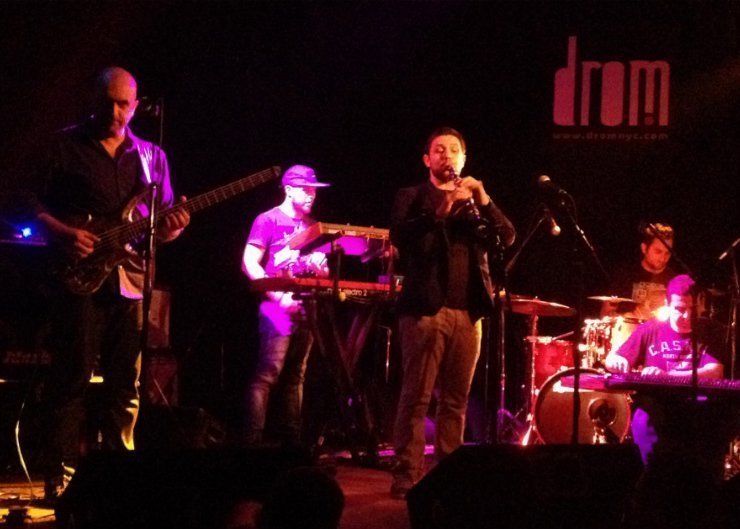 A quintet of clarinet, bass, the dulcimer-like qanun, percussion, and keyboards, the NY Gypsy All-Stars are led by ridiculously talented clarinetist Ismail Lumanovski. Macedonian-raised and Juilliard-trained, Lumanovski seemed totally at ease with the most difficult of technical passages, his crazy-fast fingers and tongue blazing through the night. He also showed off amazing variety with his sounds -- one moment he'd be screaming out scoops and glissandos or tiptoeing bravely through the clarinet's highest notes, the next he'd be whispering to the audience, low and breathy.

Highly impressive musically, bassist Panagiotis Andreou also provided the heart of the band's onstage personality. At one point he crouched low as he pounded out a bassline. Another time he swung his arm like a lasso. He also delighted with shouts, throwing rapid-fire tonguing into the mic throughout the night and booming out the band's name during a pause in the awesome opener, "Romantech," one of many songs the band played from their 2011 album of the same name.

Qanunist Tamer Pinarbasi, on the other hand, was endearingly understated in his stage presence but still virtuosic in his big solo. Further, his playing was always vital to the band's original sound. Just as important were keyboardist Jason Lindner and percussionist Engin Gunyadin. Lindner's inventiveness with electronics was key to the band's extremely cool soundscape, and Gunyadin was the perfect engine for the band, his energy undying yet unforced. 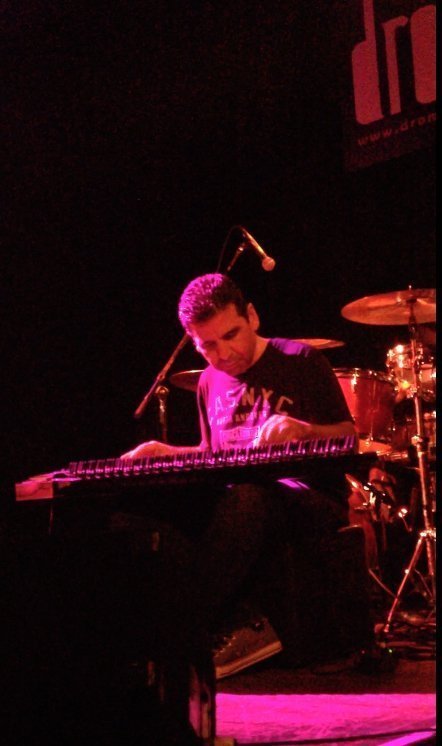 Toward the end of the concert some of the band's friends -- an unnamed trio from Greece that have played with popular Greek singer Antonis Remos -- joined them onstage. To incorporate the trio, Gunyadin and Lindner were replaced on percussion and keyboards, respectively, and singing was added to the mix. Good musicians in their own right, the trio's sensibilities did not quite match the All-Stars', and the resulting sound was somewhat generic. 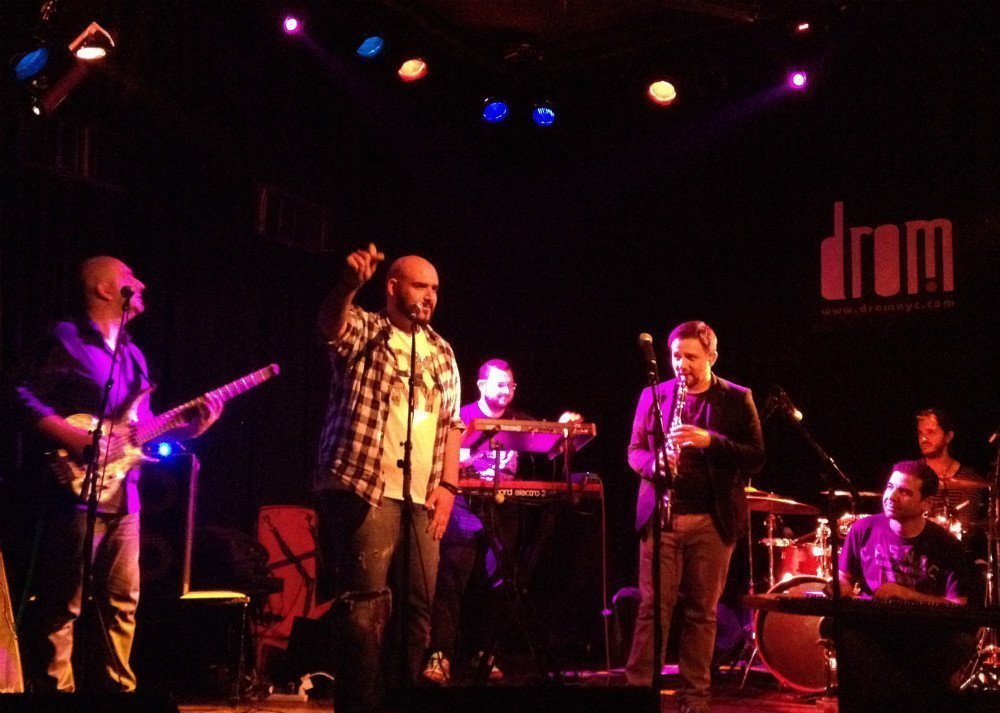 The friends played two songs with the band before leaving the stage, allowing an evening that began with energetic and enjoyable Jewish-Moroccan opening act Neta Elkayam to end with our All-Stars. They wrapped up with a slow tune and then a high-energy closer, which featured Lumanovski on a "half-clarinet," the original instrument with two of its parts left out. This gave it a higher though limited range and a quirky timbre similar to bagpipes. Lumanovski cackled with the instrument to end the last song, tying up the concert playfully. 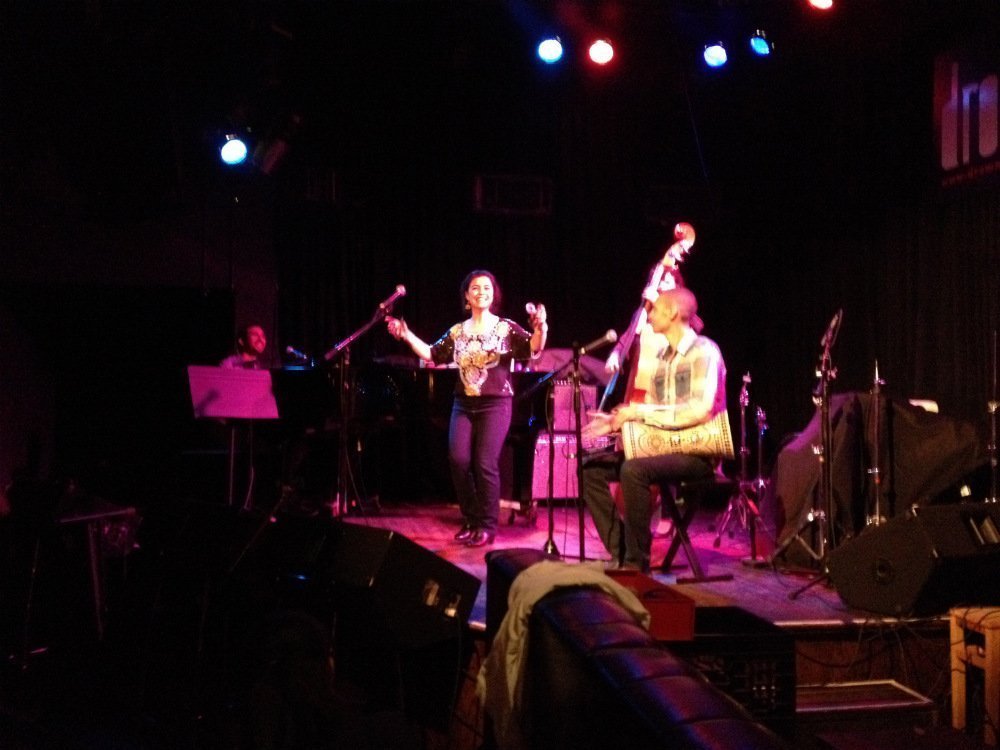 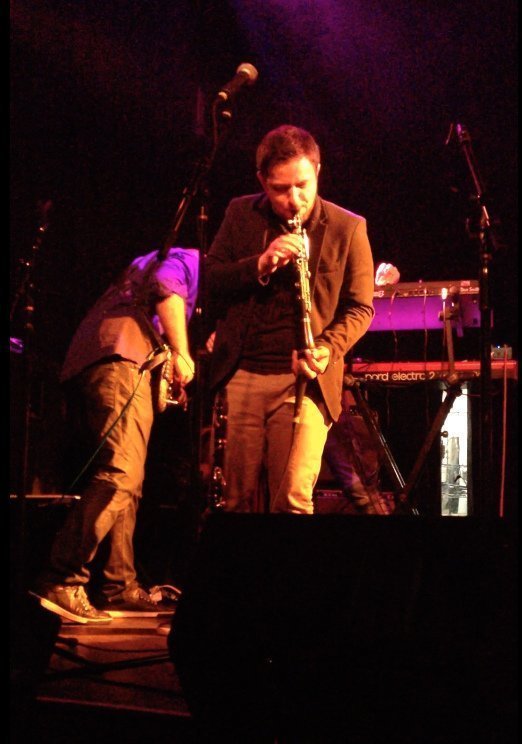 Check out the NY Gypsy All-Stars live when they return to DROM next Thursday, May 29th, with Lars "Lati" Kronlund from Brooklyn Funk Essentials on DJ set and another unknown special guest from France -- perhaps a trumpet player, as the poster below suggests. And be sure to listen to the All-Stars' album Romantech from Spotify. 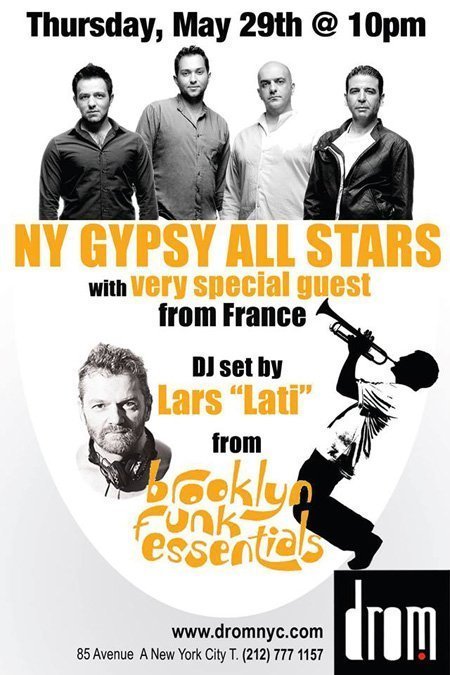