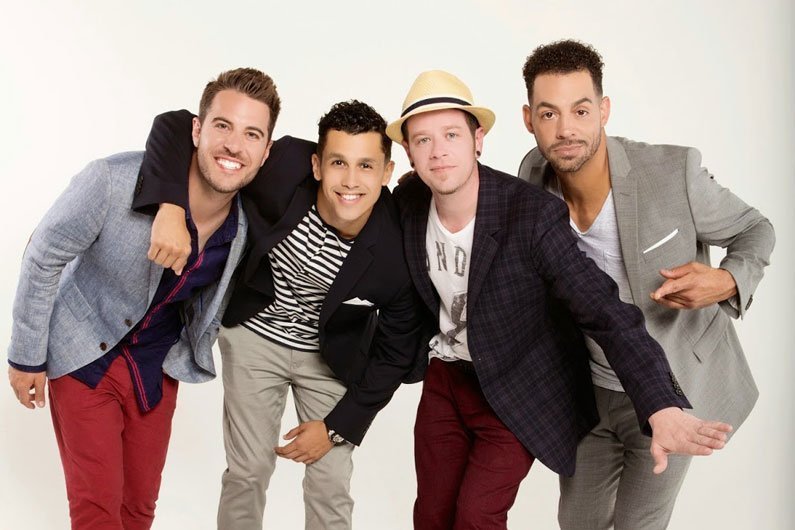 O-Town, the original stars of ABC's Making The Band, are making a comeback. The boy band have just released Lines & Circles, their first new LP since 2002's O2. We had a chance to catch up with them recently and talk about their rejuvenated career. Check out our full chat below.

Zumic: You just released “Skydive,” your first single in 11 years. Can you take us through the recording process and how the reception has been?

Jacob: This process has been the most fun we’ve had together in a long time, and the fans are the biggest part of that. We were welcomed by fans at the airport throughout Europe, and they’ve been showing up with pics we’ve taken together over a decade ago. Bottom line is, we wouldn’t be doing this if it wasn’t fun, and it’s been incredible so far.

Other than the absence of Ashley Parker Angel, what is different about O-Town today, from O-Town in the early 2000s?

Trevor: It's been different, but it's been awesome... The main difference between O-Town then and now is that we are doing everything. We don't have a major record label telling us what to sing and what the album artwork is going to look like. We are actually doing all that stuff within the band. O-Town has its fingerprints all over this process -- from songwriting, to managing, to design, to the live show -- we are the ones in control of it all. It's amazing, 'cause we're actually getting to express ourselves as artists and not just singers.

How does the modern day pop star compare to the pop icons when you guys first came together?

Trevor: I believe the biggest difference between pop stars then and now is the how the industry has been changed by recent technology. Social media has changed everything in a good way. It's a lot easier to interact with your fans and hear their opinions immediately, which I think is awesome for not only the fan, but the artist as well.

You guys have all recorded and performed independently over the last decade. Do you have any regrets about the split?

Jacob: We never knew it would be so long of a break at the time, and once we started on our individual paths it became harder and harder to get back together. I think we all agree that break was necessary to bring us to the point we’re at today. Getting degrees in business and graphic design, and the experience of living in Nashville and branching out into new avenues has allowed us to take the lead on this project and create the O-Town that we always wanted it to be.

Did any of you have non-music related jobs before Making The Band?

Jacob: I worked at Taylor Guitars building acoustics for a little while before O-Town. And after, I built hand-made custom microphones for Korby Audio, restored 68 - 82 Stingray Corvettes, did construction with my family, and pretty much everything else you’re supposed to learn as a well-rounded man that we kinda missed out on as a child chasing music.

Ikaika Kahoano turned down a spot to be in O-Town to go to medical school. He went on to perform in the less successful LMNT. Have any of you guys spoken to him since? Do you think he regrets that decision?

EM: I believe we might have run in to him once in NY, possibly during the LMNT times. But no, I know I never reconnected with him. He doesn't seem like the type that would regret a decision. Hope he doesn't. When Ikaika quit, it motivated us even more to win. That's when we called Dan. And it was shortly after that when we signed with J Records. Truth is, it's hard to say we would have been as successful if he didn't quit. Can you imagine "All or Nothing" without Dan’s voice opening up the first verse? If I were to see him now, I'd have to thank him.

Your album Lines & Circles came out on August 24th. What can fans expect to hear on this album?

Jacob: This is the first true “O-Town” album. That looming question we’ve had of what we could accomplish if we had a label trust us and empower us to create the music, and be the artists we want to be is about to finally be answered. I believe this to be our best work to date.

If you were to create a dream song with anybody from history, who would be produce it, who would be featuring on it, and which venue would you choose to perform it at?

Jacob: Hmm, good one... I’d have to say it’s always been a dream of mine to be on stage with Michael Jackson. In a perfect world, I would sing opposite Michael on the song “Bad” and sing the duet part Prince was meant to do originally. At Madison Square Garden.

What’s coming up for O-Town in the future?

EM: We have the new single "Chasin After You" going out to radio after Labor Day. Album out on the 24th of August. Live shows in November and December. 2015 is still under construction. Speaking of 2015... it's friggin 2015, we are officially catching up with every Sci-Fi movie written.

Before I let you go, I feel obligated to ask something I’ve always wondered. What exactly is “Liquid Dreams” about?

Lines & Circles is out now. Purchase it through Amazon