We've already seen Darkside play their song "Paper Trails" live for Resident Advisor, but unlike most electronic artists' carefully manicured live sets, no two Darkside performances are the same. This time, the duo take the song to a more upbeat realm in the KCRW studios.

The song takes a little while to surface from an impenetrable wall of atmospherics, but once it does, Nicolas Jaar and Dave Harrington take us on a joyride the likes of which we've never heard from them. Adopting the four-on-the-floor rhythm of more simplistic dance music, Darkside jam out on top of it, and come out sounding like Jimi Hendrix trapped in a mid-90s UK rave. After the extensive jam, Jaar jokingly asks the host, "How'd we do on time?" as if he were a student trying to trim his final presentation to fit a time limit.

Listen to Darkside's full, 45-minute-long appearance on KCRW, in which they perform a few more songs and give a brief interview, on the station's official website. Also, be sure to check out their recent Boiler Room set (which includes a Black Sabbath cover). 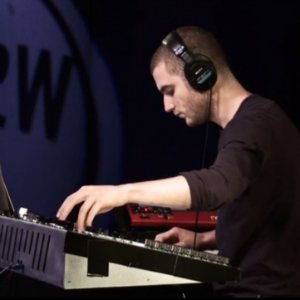