The phenomenon of creating imaginary worlds, also known as a "paracosm," is given a soundtrack in the upcoming LP from chillwave's Ernest Greene - better known to the world under the musical moniker, Washed Out. His new album, Paracosm, is more than successful in living up to its name: dreamlike instrumentation, entrancing grooves, and reverb-drenched vocals all throughout transport the listener to unknown worlds - and it's fantastic.

Even more fantastic, a week before its official release set for August 13th, Paracosm is now streaming in its entirety. Paracosm contains "over 50 different instruments," including analog keyboards like the Mellotron, Chamberlin, Novatron, and Optigan, which Greene himself says were a "happy medium" in that they "have a very worn, distressed quality about them, much like an old sample. But they also offer much more flexibility because they’re playable.”

Having already released the single "It All Feels Right," as well as the Planet Earth infused video for "Don't Give Up" two weeks ago, other tracks that stand out include the incredibly danceable "All I Know," "Falling Back," and harp-heavy "Paracosm." 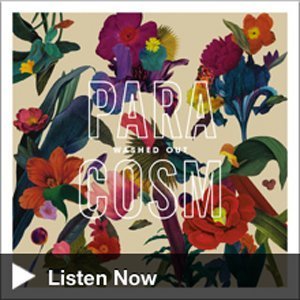 "New Theory" - Washed Out Live at Coachella Festival 4.12.2014 [Y...
Music Chillwave Electronic Indie Pop Synth Pop Washed Out California Georgia Indio, CA Live Performance (Video) Perry, GA
1
811
Back to top
You must be logged in to upvote.
Registration and login will only work if you allow cookies. Please check your settings and try again.