Pat Smear On Nirvana Reunion Without Cobain: "Why The Fuck Not?" 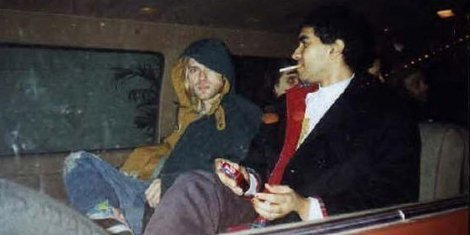 Guitarist Pat Smear, once a touring member of Nirvana, thinks that the band's surviving members should be able to play classic Nirvana songs together. In an interview with Digital Spy, Smear (pictured above with Cobain), responded heartily to speculative questions about Nirvana's legacy, including those relating to the possibility of a reunion.

Formerly a member of hardcore pioneers The Germs, Smear joined Nirvana for their 1993 tour and played on their MTV Unplugged in New York album. Since Kurt Cobain's death in 1994, Grohl, Novoselic and Smear have reunited three times -- once at a Foo Fighters show, twice with Paul McCartney -- but have never performed a song that was written by Cobain. Sticking to a Grohl-penned Nirvana B-side, a bevy of Beatles covers, and a new song that McCartney recorded with the others for Grohl's Sound City Players project, the performances were fun, but Smear wonders why original Nirvana songs have been taboo thus far. 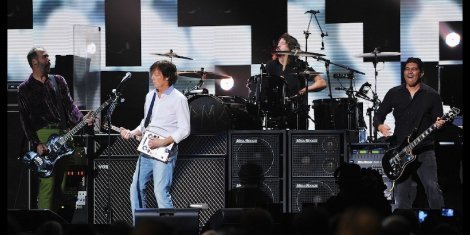 "I know Nirvana's a strange thing," Smear told Digital Spy, "It means a lot of things to a lot of people. I personally wouldn't have a problem with ." Though he admitted that such a performance might be "different for those guys (Grohl, Novoselic) than it is for me," Smear responded to questions of a Nirvana reunion with incredulous questions of his own, namely, "Why the fuck not?" and, "Why wouldn't we?"

Though it appears as if Digital Spy was trying with all its might to coax an affirmative response out of Smear, he seemed excited by the prospect of playing with his old bandmates. Referring to McCartney's recent Seattle show in which he was joined onstage the surviving members of Nirvana, Smear said, "It was fun, it was amazing. It's great to play with those guys again - always. We've done it enough times now that it kind of feels comfortable."

Listen to McCartney, Grohl, Novoselic and Smear's contribution to Sound City Players below, and debate whether the song would have Cobain rocking out or rolling in his grave.