Last night Paul McCartney guested on the Jimmy Kimmel show and played a special outdoor concert on Hollywood Boulevard. The full concert (clocking in at just over an hour) was broadcast live on Jimmy Kimmel's MySpace page, and it's still running on a loop. Click below to check it out:

The music is just phenominal. Another flawless performance by the man known as Macca. The setlist is a good balance that's heavy on Beatles classics, with Wings / McCartney songs sprinkled in, and 3 brand new songs ("Save Us," "New," and "Everybody Out There") from McCartney's upcoming album, New, due out October 15th. Paul picked up a 12-string acoustic guitar for "Everybody Out There" which was a really nice moment. 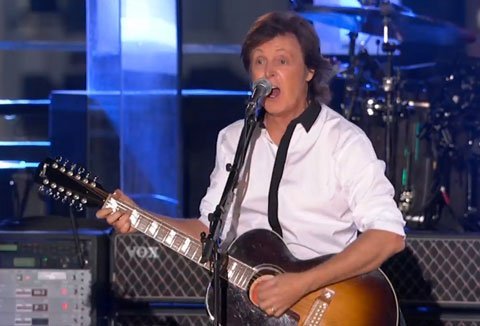 The finale of "Band On The Run" into 4 Beatles songs is a great way to end the relatively (by McCartney's standards) short set. The sing-along during "Hey Jude" is really a special moment.

It must be said that the MySpace video player isn't very good. The full screen mode doesn't work right (at least on my computer) and there's no standard video controls like pause, rewind, fast forward, etc. It's just playing on a loop. If you watch this video at Jimmy Kimmel's MySpace page, it's actually even worse because there's a bar covering a significant portion of the screen with a needless graphic of Paul McCartney and Justin Timberlake. Also, the video is pretty choppy at times as the cameras pan across the stage and crowd. MySpace fails again. At least we get a good Paul McCartney video for free. The other sponsor, Guinness, is a company that actually does great things and Zumic loves.

Also, check out the interview with Jimmy Kimmel where Paul discusses a wide range of topics ranging from nightmares Paul has about crowds leaving his concerts while they're still playing, meeting Elvis, the early days of writing songs with John Lennon, and having a hard time meeting girls with George Harrison at dances in Liverpool. 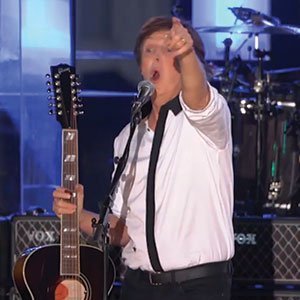 "Come On To Me"
Paul McCartney (YouTube)
Music Classic Rock Pop Rock Rock Singer-Songwriter Paul McCartney Official Music Video
2
1237
Back to top
You must be logged in to upvote things.
Registration and login will only work if you allow cookies. Please check your settings and try again.