Lowe begins the interview by inquiring about McCartney's use of four separate producers for the album, all of whom come from very different musical backgrounds. McCartney explains each producer's unique recording strategies, including Paul Epworth's stubborn refusal to be replaced by a "proper drummer" on "Save Us" and Ethan Johns' insistence on using McCartney's rawer vocal takes on "Early Days."

Hilarity ensues when McCartney slyly admits that he still "writes songs for girls," and again when Lowe learns that Macca briefly toyed with the idea of including auto-tuned vocals on "Appreciate." Unfortunately, the pair halt their track-by-track examination of New after discussing five songs, but they use the remainder of the interview to uncover an old Beatles secret.

While explaining vinyl's superior sound quality to Lowe, McCartney mentions that The Beatles included sounds on Sgt. Pepper's Lonely Hearts Club Band that are outside the human range of hearing, including a dog whistle at the end of "A Day in the Life." Even though he states that "only dogs can hear" the sound, my ears definitely pick up the faint, high-pitched noise that appears at approximately 5:07 of the song's full version. See if you can hear it too.

You can stream New right here on Zumic. 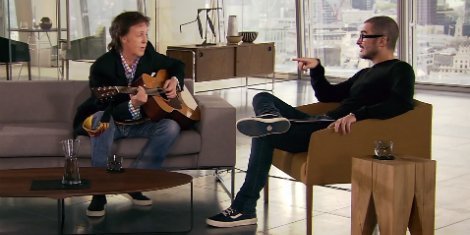 "Fuh You"
Paul McCartney (YouTube)
Music Classic Rock Pop Pop Rock Rock Paul McCartney Official Music Video
3
776
Back to top
You must be logged in to upvote things.
Registration and login will only work if you allow cookies. Please check your settings and try again.