Following this year's reunion and the April release of Save Rock And Roll, Fall Out Boy are coming out with more new material. Pax Am Days is a Ryan Adams-produced EP featuring 8 songs the band says are heavily influenced by old-school punk.

In an interview with KROQ, singer Pete Wentz described their inspirations, citing Metallica's Master Of Puppets, and bands like Gorilla Biscuits, Descendents, and Screeching Weasel.

“That’s the music that got us into playing as Fall Out Boy and we wanted to pay homage to that. I think, for bands like us, we can be a gateway. We can say like, ‘Hey, check out what these other bands we grew up with do.’ I think that’s an important thing to do as an artist. But most importantly, it was just kind of exercise in fun."

The singer went on to describe his experiences working with Ryan Adams as a producer:

“It was wild. Ryan’s brain works in such a divergent way. One minute he’s telling a joke about kale salad and the next minute we’re talking about old punk rock. I think that in some way it’s childlike wonder, and in some ways it’s so genius and different. He’s such an outside-of-the-box thinker — it was really good for our band.”

Take a listen to the album above and read the full interview at KROQ. Pax Am Days will be out October 15th along with a deluxe reissue of Save Rock and Roll. You can get the EP via iTunes. 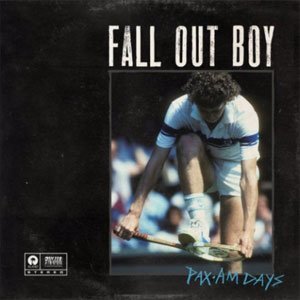 "Fuck The Rain"
Ryan Adams (YouTube)
Music Rock Singer-Songwriter benmont tench John Mayer Ryan Adams Audio Single
2
1016
Back to top
You must be logged in to upvote things.
Registration and login will only work if you allow cookies. Please check your settings and try again.