In honor of the tenth anniversary of Jay Z's Black Album, Pharrell Williams sat down for an interview with Life + Times ("a digital experience covering art, sports, music, fashion and culture" owned by Jay Z) to discuss his contributions to the album.

Introducing himself as "Pharrell Williams: Musician, Purveyor of Great Experiences, Good Music," and Jay as "a modern day, like, real artist," Pharrell spends a great deal of the interview praising the MC's artistic vision and recording process. He recollects the recording of The Black Album, during which he remembers Jay acting as both "the architect and the contractor," trying to envision his work from all different sides, from the origin of its sound to the effects it would have on listeners.

Pharrell can't contain his amazement when discussing Jay's seemingly intuitive writing process, and compares him to the Oracle of Delphi, a mythological priestess who would inhale fumes coming from a fissure, get "high as an eagle's ass," according to Pharrell, start "muttering, and then she has a prophecy." He admits that this comparison might be "artful," but says, "if it weren't true I wouldn't even be able to say that."

Also discussed is Pharrell's synesthesia, which causes him to view most of his production work for Jay Z as being composed of "tertiary colors." In contrast, when producing Magna Carta Holy Grail cut "Oceans," Pharrell says he was aiming for "concord blues and like dark, dark, dark, dark, dark greens." Ultimately, the producer says he wants to consistently make music that "gives the ears and heart a texture that can't be matched."

Check out the full interview above, and more like it on Life + Times' YouTube Channel. Though Pharrell says that he and Jay would like to be thought of as "artists' artists" rather than successful musicians, the pair is also known for their respective incomes. Check out where they both land on Forbes' "Hip-Hop Highest Paid List." 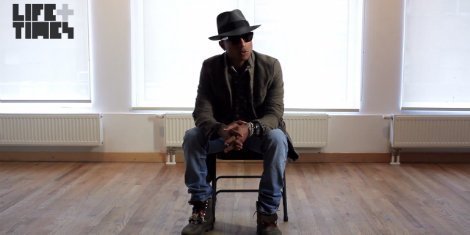