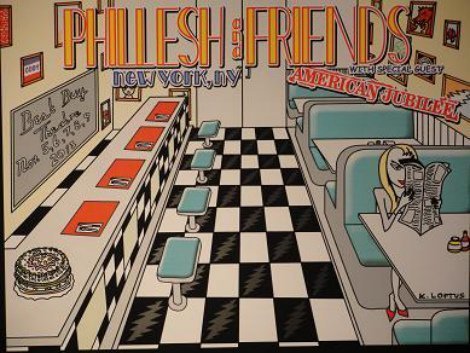 Phil Lesh and Friends proceeded with their second show of a five consecutive night run at the Best Buy Theater in New York's Times Square on Tuesday night, November 6, to another packed house of fans. This version of Phil's band includes the man himself on bass, Luther Dickinson (North Mississippi All Stars) on guitar / vocals, Anders Osborne on guitar / vocals, Phil's son Grahame Lesh on guitar / vocals, Jason Crosby (God Street Wine) on keys, and Tony Leone on drums. This was my first time seeing this collaboration of musicians and I can honestly say they were SMOKIN' the whole night!

The first set kicked off at 8:15pm with a jam into the much covered Solomon Burke song "Everybody Needs Somebody To Love." Another cover followed, this time it was "And It Stoned Me" from Irish songwriter Van Morrison. Anders Osborne assumed the vocal duties on both songs and did a great job. It was also an interesting way to start the first set. Although they were covers the crowd was into it nonetheless and were really getting into the groove. Deadhead fans got their first Grateful Dead song of the night with the next song "Brown Eyed Women." The place couldn't have gotten any louder when everyone (including myself) sang along to the chorus.

The energy in the crowd was high but it was time to come down and get lost in the melody of "Birdsong." They played an impressive version of it and really brought certain sections to a trippy place. It's an amazing song lyrically and Phil's vocals really added a warm feeling to the tune. The energy got lifted again when the next song kicked in. Another cover, this time from The Band, and their popular hit song "The Weight." Every time the chorus started there were many in the crowd that raised their hands and arms in the air, as if the song was being poured like water over them. Positive vibes were everywhere in the crowd and all the band members looked to be in the zone.

Luther took over the vocals for the next tune, and rightfully so, as they played a North Mississippi All Stars song titled "Hear The Hills." For the last number of the first set, Phil & Friends blew everyone away with a killer version of Neil Young's "Cortez The Killer." Anders and Luther both got opportunities to impress us with their guitar wizardry throughout the song.

After a short set break in which I overheard fans giving their best guesses as to what the band would open up with, we all gathered back onto the floor to get our second dose of Phil and Friends. After a couple of minutes noodling around, the band broke into a favorite among many Dead fans, "Playing In the Band." This song originally started off as a short, radio friendly song when The Grateful Dead first played it live in concerts in the early 1970's. Over time the song got really stretched out where it would easily reach 10+ minutes (5.21.74 anyone?) and other songs would be incorporated into it. Kicking off the second set with this specific song meant that anything could be played next and us fans were in for a long, strange trip.

The previous night's show included some Rolling Stones covers and tonight we got our first one with "You Can't Always Get What You Want." It was noticeable that many in the crowd were also Stones fans as evidenced by them excitedly singing along with Anders. The Howlin Wolf classic "Smokestack Lightning" brought a touch of the blues to the night as Luther sang vocals for this and on the next song "Shake Em On Down," which is a staple in a North Mississippi All Stars set list.

Grateful Dead fans were once again in bliss when the band strummed the opening notes for the song combo of "Scarlet Begonias > Fire On The Mountain." I did not see one person standing still as the song was played; EVERYBODY was dancing! Personally, it was a real treat to watch Phil's face as he played and captain'd the band with his deep, soul grabbing bass lines. He could not stop smiling and neither could we.

Anders Osborne stepped up to the mic to sing a heart felt version of "Comes A Time." This is a personal favorite song of mine and the band played the tune in a way that allowed me to get lost into the words and my personal thoughts. I did glance around the room to see what others were feeling and it was obvious that this song, in one way or another, held a deep memory for some. The Rolling Stones' "Brown Sugar" got the crowd back into the rock n roll spirit that led into a dance friendly "Franklins Tower" followed by bringing the second set to a complete circle with "Playing In The Band (Reprise)."

The band left the stage to a loud applause as people were whistling and yelling "MORE!" As has become the tradition, Phil came out to thank us for helping him make the music and to thank Cody for being an organ donor and saving his life. After encouraging us to follow Cody's spirit and generosity the band came out to perform one last song. Tonight's encore was "Friend Of The Devil" and judging by reaction, everybody approved of the selection. Many people left the show in high spirits and looked forward to attending at least one more show on this tour.

To keep up with the latest Phil Lesh news, music, and tour information, check out his Zumic artist page. 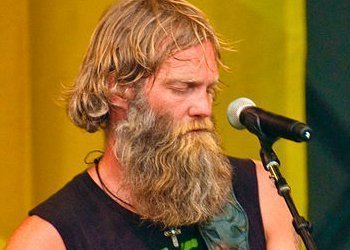