Watching Phoenix's set from "Live On Letterman", the most striking thing is that Thomas Mars has one of the most unique vocal styles of anyone in rock and pop these days. This is one of the many things that separates Phoenix from other Indie Pop / Rock bands out there who are heavy on synth and electronic beats. In this performance, Mars is really on point. It's amazing that he's able to replicate his studio sound live.

The rest of the band is great, too. After a fairly long break between their brand new album, Bankrupt!, and 2009's Wolfgang Amadeus Phoenix, they don't seem the least bit rusty. Every groove is solid. No sour notes. Lots of interplay between all 6 guys on stage. Absolutely delightful. Deck d'Arcy and Laurent Brancowitz are so impressive as they switch from keyboards to stringed instruments. Christian Mazzalai brings great energy on guitar. Thomas Hedlund is a powerhouse drummer nails each and every song. Robin Coudert provides the rhythmic elements on synth that push the band's sound to another level.

There's some interesting curveballs in here, as well. The band alters the "it's showtime..." breakdown in "Lisztomania" and goes into something a little different before the song ends and Mars says "We are Phoenix, comin' from Paris France. C'mon, make some noise!" ... at which point the crowd makes a whole bunch of noise and then quiets down rather quickly in anticipation of more awesome music!

The light show is pretty wild, too. 6 video monitors above the stage show the same camera feed (which seems to be exclusively on Mars throughout the show), which is pretty unusual. During "Too Young/ Girlfriend" the band is washed out in red light. The Live on Letterman camera crew has some fun too, with some cool unconventional camera angles that go everywhere from both sides of the band to behind the band to an extremely high downward angle from the ceiling. Personally, I love the wide angle shots where you can see the entire band on screen.

The only problem with this is that the full video is not High Definition quality and is actually very pixelated on my computer during some parts. I hold DAVID LETTERMAN personally responsible. C'mon Dave. Heh heh. Just messin' around. The audio sounds great, and that's the most important thing. 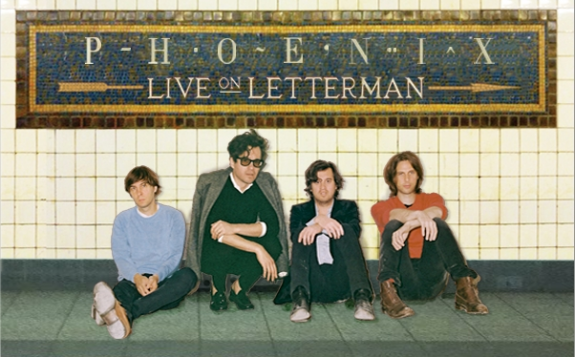