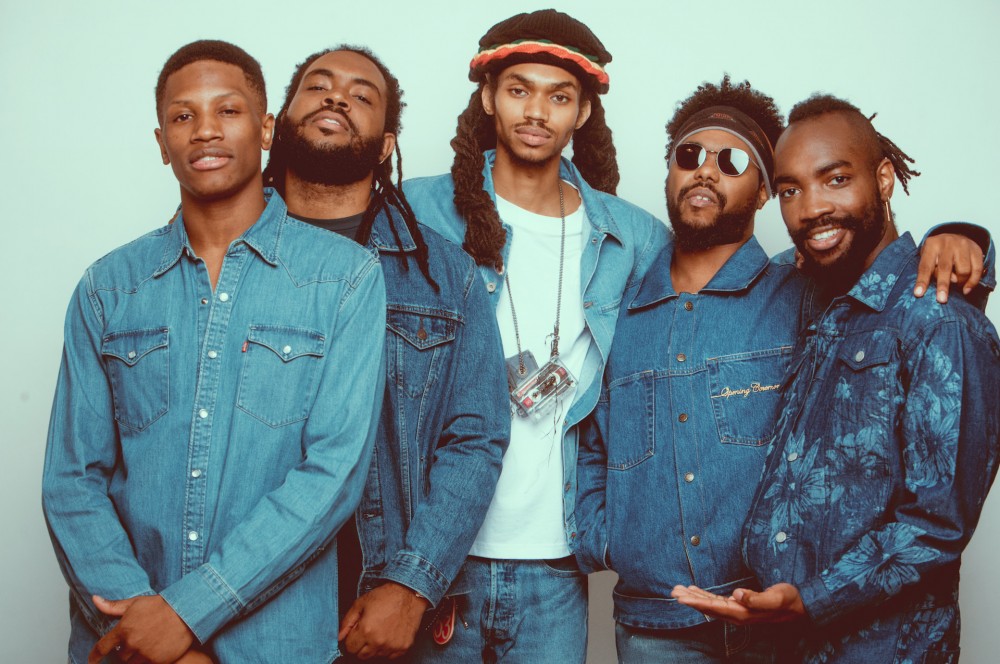 Active since 2008, Phony Ppl have shown a strong work ethic that is now bringing their experimental R&B and hip-hop sound worldwide.  Using their abilities to experiment while still retaining a sense of composure and melody, they are creating innovative and fresh new music in a constantly-changing industry.  The group has also been getting more attention as members have collaborated on projects with Erykah Badu, Kali Uchis, and Mac Miller.

In our discussion, we covered the current state of music, their influences, their creative process, and their increasing commercial success.

I’m curious about what your influences were during the recording process for your most recent album, mō'zā-ik.  Is there anything specific you had in mind while you were in the studio? Was there anything on repeat?

There’s so much over the course of the years.  Because it was such an extended process, I think pretty much everything that we were listening to, whether it was Marvin Gaye to Michael Jackson, whether we were in a bus traveling or just being at home hanging out and passing tracks around for each other to listen to over the internet.  I think we sort of took everything into account while making the project.

When we were recording the second song on the project, “Once You Say Hello,” I remember I was trying to understand the essence of, like, all of Brazilian percussion and Samba and the different beat patterns and I came across this ​​​​​​hour-long video by Airto Moreira on YouTube. I sat down and studied them and learned a lot about percussion, the rhythm, how the drums followed the vocal, and a lot of things like that.  We did a lot of research on a lot of parts and, you know, we just sought things out — there was nothing specific we were listening to but, if we had questions, we tried to find the answers through things like YouTube documentaries, positive instructional videos, et cetera.  We try to understand the essence of where things come.

To add something while we’re on the album process — I find music to move so fast today that you either find something and you like it or you don’t.  That inspires you to either go closer towards it or to move farther away from it.  A lot of times in those four years, I was actually not listening to other music besides our own just so I could form my own style of writing and my own style of percussion, you know.  I’d hear new things when a car was passing by or, you know, chilling at a friend’s house smoking... I’d try to find inspiration in other things besides music, from talking to people, what happened that day, what colors I’m wearing, if the weather is great today.  You know, just really tapping into where the music comes from versus what I want the music to sound like.

You guys make a point of genre-blending, your name on Twitter is even “noGENRE PhonyPpl.”  Where do you guys feel like that comes from? Boredom with the current music industry, something else?

I think it comes from the will to innovate and it comes from people telling you, “Life is fine like this,” but, you know, what else? What music haven't you gotten to?  It’s like if you were living in a time where you didn't have a map.  You could go to the edge of the island and see beyond, so much land, so much water... but if you go beyond, you could hear things you’ve never heard, taste some new flavors.  I feel like there’s always more culture within us and we’re all trying to innovate for the culture of the future that we’re trying to work on now.  There’s a lot of people innovating now, don’t get me wrong, but I feel like a lot of popular or easily accessible music is coming from the same energy or the same ideas as the past. We’re trying to get away from that.

I feel like a lot of artists these days are consciously crossing genre boundaries and that it has something to do with technology and the internet: wider access to music that used to be hard to find is much more common now through social media, streaming, file-sharing, etc. as opposed to the past when people would have to buy music at record stores. Do you feel like the internet has helped you guys to do this?

How did you guys go from sort of DIY, networking yourselves, to connecting with the 300 Entertainment label.  I feel like it’s a very good fit for you guys and I was wondering if it was an organic process, and how it has been going?

When we were drafting our 2015 project Yesterday’s Tomorrow, 300 expressed interest, came to us and were like, “Let’s figure out a nice distribution deal — something small where we can get your project on platforms, see how the people like it.”  The people dug it and that led to more conversations about us actually being a part the label and reaping the benefits aside from just distribution.  It’s been a beautiful process, they’ve given us a lot of opportunities and leeway to make decisions and it’s not rushed.  Another thing about 300 is that it’s a new label and they’re progressing very quickly but it’s small so it allows us to really flourish and move in such a way where it’s beneficial to us.

It’s a partnership feeling more so than it would be with a more traditional label. The consensus is that we’re working together for the benefit of everybody, from the fans having good music to 300 helping us with artistic and creative direction — but not in a way that’s invasive.

Did the Pusha tour come through 300?

That came through our booking agent Cara Lewis, actually.

I’d say a lot of the people we want to collaborate with have been actually long-term friends of ours for a while.  The Internet, [Donnie Trumpet and] The Social Experiment, Chance The Rapper.  It’s just that all of them just live in LA though, so the timing usually doesn’t work out – when they’re in New York it’s for a short amount of time, and when we’re in LA it’s for a short amount of time.  We actually want to be able to start collaborating a lot more soon with the people we have a natural connection with.  We actually want to work with Anderson [.Paak] too.

It seems like it’s been a pretty busy year.  Are you guys planning on touring more throughout 2019 or just taking a break?

It’s never break time.  We’re going even harder in 2019.  We’re going to Japan and Korea in January and we’ve already got dates into July at this point.  We don’t like taking breaks, we don’t like staying home for too long.

We’re working on a new record.  Now that we have a lot of our infrastructure in place and the label situation is very lucrative for us, it’s not going to be another three-year process for our next project.  There’s a lot of things to set up and we have a lot of opportunities lined up so we’re planning to focus on traveling outside the country and recording.

I feel like that’s necessary in the music industry today, it’s constantly changing and you kind of just have to be on top of things to keep up.

That’s the longevity format, you know.  We want to be the slow-burning candle versus the firework, we want to be around making music for a long time.  The only way to do that is to always be active.

For information and upcoming tour dates, check out their Zumic artist page.