As Mike WiLL Made It originally wrote "We Can't Stop" for her, Rihanna must be feeling a lot of jealousy towards Miley Cyrus' prolonged moment in the spotlight. For that reason (possibly among others), she's just released a video for another Mike WiLL-produced track, "Pour it Up," in which she attempts to out-twerk her younger competitor.

Seated upon a golden throne, which she later humps, Rihanna leads a gaggle of pole dancers in showing Cyrus how it's really done ("it" being provocative dancing). We'll leave it to you to decide who would win should an all-out twerking war break out between Mi-Cy and Ri-Ri, but the latter certainly has more *ahem* junk in the trunk than the former.

GIFs via: Every Joe & Smoking Section 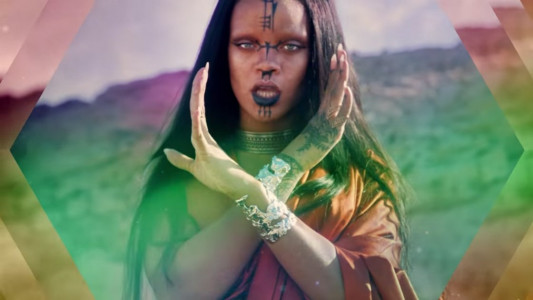 "Sledgehammer" – Rihanna [YouTube Official Music Video + Behind...
Music Film/TV Scores Pop Rihanna Sia Barbados Official Music Video
1
1052
Back to top
You must be logged in to upvote things.
Registration and login will only work if you allow cookies. Please check your settings and try again.