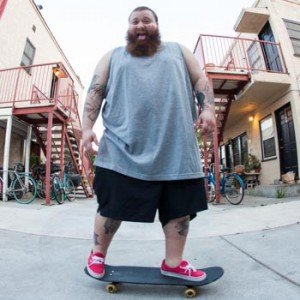 Earlier this month, we posted a video of Action Bronson performing two songs from the upcoming sequel to the Party Supplies-produced 2012 mixtape Blue Chips, and now we've got an audio stream of another Blue Chips 2 track. Bronson premiered "Practice" on Peter Rosenburg's Hot 97 show last night, so unfortunately it's clean and has a few pesky DJ tags.

With an ever-impeccable ear for samples, Party Supplies nabs audio from former NBA star Allen Iverson's infamous "we talkin' bout practice" interview to serve as an intro, segueing into a horn-heavy strut. Bronson spits his usual mix of non sequiturs and food-related rhymes, squeezing a Patrick Bateman comparison and a wish to get the "whole block smelling like bacon" into the same couplet. It's just the type of wacky, enthralling rapping that was, along with Party Supplies' adventures in sampling, a hallmark of Blue Chips. This can only mean great things for the sequel.

Bronson recently tweeted an updated release date and tracklist for Blue Chips 2, both of which you can view below.

Action Bronson Announces 'Blue Chips 7000' Tour Dates: Ticket Pre...
Tickets Hip Hop Action Bronson
1
1239
Back to top
You must be logged in to upvote things.
Registration and login will only work if you allow cookies. Please check your settings and try again.