Grateful Dead Preview 2018 Meet-Up at the Movies with "Ramble On Rose" from Philly, 1989

Another classic from the Brent Mydland years

The 8th annual Grateful Dead “Meet-Up at the Movies” has been announced.  This year’s event will be held on August 1 at 7 PM local time.  Fans will be treated to previously unreleased Grateful Dead concert footage from JFK Stadium in Philadelphia, PA that took place on July 7, 1989.  The footage was previously released in 2010 as the Crimson White & Indigo CD & DVD album.

In anticipation of the event, the band has shared a live video clip of a laid-back performance of “Ramble On Rose” from that show, which you can watch above. You can find more information about the event and how to purchase tickets by visiting Fathom Events.

Here is what you can expect to hear from the concert, as described in a press release:

The Philadelphia concert offers a snapshot of the Dead’s 1989 tour, where the band played to some of its biggest audiences ever. The band helped raze the aging stadium, thundering through “Hell In A Bucket,” “Little Red Rooster,” and Bob Dylan’s “Stuck Inside Of Mobile With The Memphis Blues Again.”  Many sitting at the north end of the open-air stadium recall the concrete bleachers trembling during Mickey Hart and Bill Kreutzmann’s drum duet in the second set.  The show closed with another Dylan cover, “Knockin’ On Heaven’s Door,” the last song ever performed at JFK.

This is the 4th year in a row that the Meet-Up at the Movies features a concert from the band's run of shows in July of 1989.  Last year, it was 7/12 from RFK Stadium in Washington D.C., the year before was 7/2 from Sullivan Stadium in Foxborough, MA, and the year before that was 7/19 from Alpine Valley.  '89 was a great year for the Grateful Dead, playing crisp shows with good energy, but it might be nice if they dig deeper into the vault with more diverse material for future screenings.

For more music and news, check out the Grateful Dead Zumic artist page. 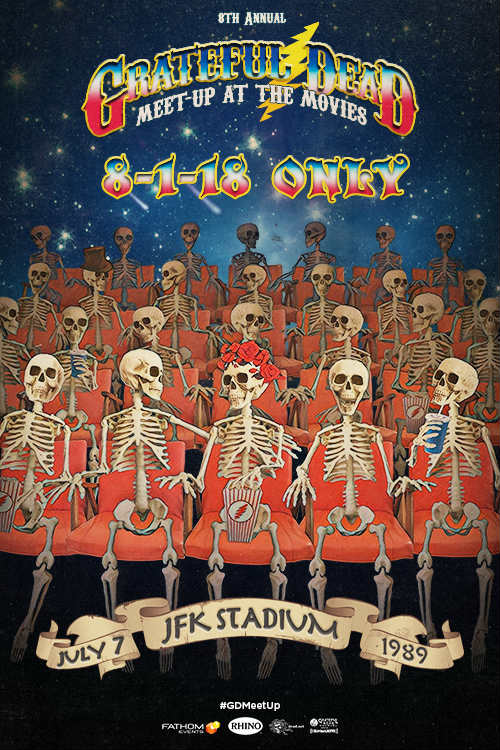 "He Ain't Give You None"
Jerry Garcia Band (YouTube)
Music Classic Rock Jambands Psychedelic Grateful Dead Jerry Garcia Jerry Garcia Band Van Morrison Live Performance (Audio)
2
798
Back to top
You must be logged in to upvote things.
Registration and login will only work if you allow cookies. Please check your settings and try again.