Washington D.C. group RDGLDGRN (prounounced "Red Gold Green") has one of the most anticipated debut albums of 2013, working with Dave Grohl on drums and Pharrell as a producer.

Check out this awesome video that shows the group talking about how the album has come together with producer Kevin Augunas who was able to recruit another Washington D.C. native, and the world's greatest drummer: Dave Grohl. The footage of the band dancing in the Fairfax Recording Studio in Van Nuys, CA while Grohl drums is fantastic. There's pretty similar footage of the band dancing around as Pharrell works his magic in the recording studio control room. Plus, lots of soccer and an explanation of why the band is called RDGLDGRN. 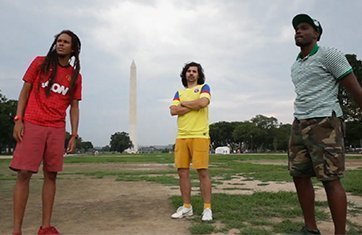 "Dirty Computer"
Janelle Monáe (YouTube)
Music Funk Hip Hop Pop Brian Wilson Grimes Janelle Monáe Pharrell Zoë Kravitz
4
1548
Back to top
You must be logged in to upvote.
Registration and login will only work if you allow cookies. Please check your settings and try again.