DJ extraordinaire Diplo released his newest solo work today, entitled Revolution. Featuring the talents of a multitude of rappers, the producer created some beats designed to power a party. Diplo is slowly refining his trap style of electronic music, adding many interesting details to the constant motion of his songs. The title track "Revolution" exemplifies this with its pop-ish lyrics seamlessly flowing into a very different, and heavier drop. Utilizing many different synthesizers he manipulates timbre to keep repetitive rhythms fresh and interesting.

Diplo doesn't allow the number of contributing artists overpower his own voice, either. Towards the end of "Crown", Diplo manages to incorporate Riff Raff into a song without having him take over. Mike Posner also contributes his vocal talents to "Crown," giving an airy feel to this anthem.

Nicky da B makes an appearance on the the last original track on this EP, called "Rock Steady." Bolstered with rap verses by Riff Raff, Action Bronson and Mr. MFN eXquire, this track is intended as "an homage to old-school hip hop" according to the Soundcloud page. If you like any of these rappers, then you'll like this track.

To round out the album there are remixes of "Revolution" and "Biggie Bounce." Both good, they show the different directions the songs could have taken. Boaz van de Beatz moves "Revolution" closer to a hardstyle track, reminiscent of Flosstradamus. TWRK expands the space in "Biggie Bounce" making it feel larger and more open. Interestingly, they also add their own rap verses into the song, taking the track even further away from the original.

Mad Decent's description of this album on it's SoundCloud page sums this EP up nicely: "Each track on the Revolution EP highlights a different aspect of Diplo's production style and displays why he's one of the most sought after producers in the world." 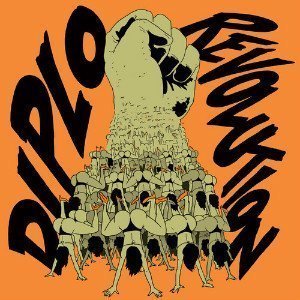