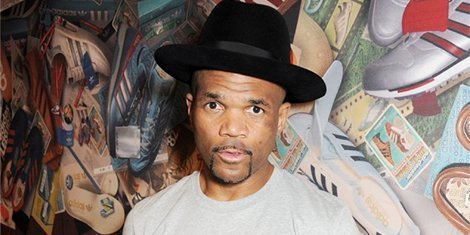 ‘It seems like stupid America celebrates a person that says “yeah I’m a drug dealer, I’m bringing the drugs into the hood”. The reason why hip hop exists is because it started out with good intentions, once all the good intentions left the music became polluted, it became disrespectful it became immature.’

The article states that DMC is so unhappy with the culture of irresponsibility that he vows to kick rappers like Jay-Z and Lil' Wayne's "ass out of hip-hop":

A rapper will use this excuse – “man they don’t go after Arnold Schwarzenegger and Bruce Willis when they make their violent movies” and I go “if you’re going to use that excuse get off the mic, don’t produce." I’ll personally kick your ass out of hip hop cos if you’re using that excuse go be an actor.

The rapper, along with his other half, Joseph "Run" Simmons, and the Canadian DJ A-Trak, teamed up with Run DMC's beloved brand, Adidas, for the clothing conglomerate's FW13 Adidas Originals campaign - all in an effort to resurrect the positive attributes of hip-hop's glory days. The collaboration will feature a remix of Run DMC's 1986 classic, "My Adidas," where the group "took positivity and made it gangsta" upon seeing the original "shell-toe sneakers and saying 'those are dope.'"

Check out the campaign's trailer below: