Savages Perform Songs from "Silence Yourself" 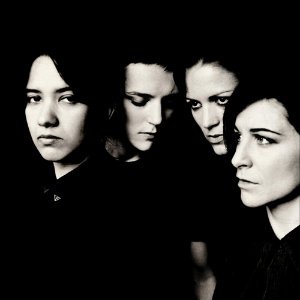 Savages have been garnering a lot of attention since they formed in 2011. Already, their debut album, Silence Yourself - which came out in May - has received critical acclaim. The London-based, post-punk group did an interview with WNYC earlier this week, along with performances of three of their songs.

The all-girl band started by playing "City's Full," an angry and haunting track from Silence Yourself. In the interview portion, Savages discuss their origins and how they write music. Singer Jehnny Beth also reveals the inspiration behind some of the songs on the record. Savages then had time to perform "She Will" - check out a video of their July Pitchfork Festival performance of the song here - as well as "Husbands." Both songs are as dark and raw as "City's Full." The interview ends with the studio version of the Silence Yourself closing track, "Marshal Dear."

"Adore Life" - Savages [Official Full Album Stream + Zumic Review...
Music Savages Full Album Stream London, UK LP
1
813
Back to top
You must be logged in to upvote things.
Registration and login will only work if you allow cookies. Please check your settings and try again.