Snoop asked Q about his TDE crew (which includes Kendrick Lamar), whose members all come from different parts of L.A. "They would have never been talking when I was rapping," said Snoop, and Q admitted that even though he is the "only blue rag at TDE" (I.E. the only one from a Crip-dominated neighborhood), "we just don't give a fuck no more." The landscape of Hip Hop has drastically changed since Snoop was starting out, when repping one's hometown came first, and regional differences meant everything. Now, according to Snoop, "A nigga from New York or Atlanta don't say, 'Well he's a Crip, and he's a...' They just say, 'Them niggas is dope."

Later in the interview, Q revealed the origin of the name "ScHoolboy" (his 3.3 High School GPA), discussed his crew's impeccable work ethic in the studio, reminisced about not being able to afford gas, and fielded several fill-in-the-blank questions from Snoop (sample: "I look for _____ in a woman?"). Overall, the serious content of this interview is outweighed by the pair goofing off, making us wish that Q starred alongside Snoop in his stoner comedy Mac & Devin Go to High School instead of Wiz Khalifa.

The fifteen minute-long video also features a brief appearance by Rob Dyrdek, and quite possibly the most rachet weather segment of any news show in history. Check out more episodes of GGN over at Snoop's YouTube channel. 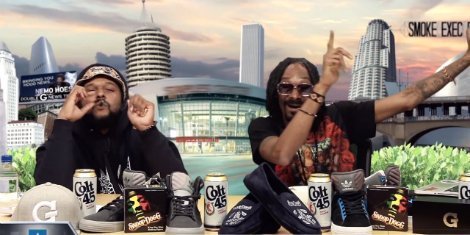