Last night, Donald Glover (AKA Childish Gambino) stopped by The Arsenio Hall Show to give a short interview and play a song from his upcoming album Because The Internet. "Shadows" features bass virtuoso Thundercat, who also showed up, clad in a fantastically vibrant outfit. Watch the performance above.

Even if it didn't have the line "poppin' pills at the Coachella," the new song sounds a lot like Frank Ocean (who has been known to reference Californian music festivals and drugs in the same song). On "Shadows," Gambino sings more than he usually does, and mines the same vintage funk/jazz sound that coursed through the veins of Ocean's Channel Orange. But regardless of the song's influences, it's awesome to hear Gambino collaborating with a Flying Lotus affiliate.

The performance of "Shadows" was preceded by an interview (below). Oddly enough, Glover showed up wearing the same shirt he did in his Vibe TV interview two weeks ago. Arsenio asked the young rapper about a series of pictures he's Instagrammed that contain strange, deeply personal lists of his fears. Specifically, the host inquired about one of these lists that contains the sentence, "I'm scared I'll be Tyrese," to which Glover respectfully responded by saying that he never wants to "settle" or be overly comfortable with his career.

Glover also discussed 3D printing, being mistakenly called Danny Glover's son, and why he thinks nostalgia for Teenage Mutant Ninja Turtles is lame. It's funny, because right after that, he performed with a dude who took his nom de plume and logo from another 80s cartoon. Watch the full interview below, and check out two more songs from Because The Internet, "3005" and "Melrose." The album's due out on December 10th, and you can preorder it now on iTunes. 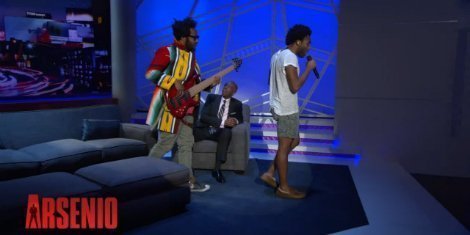 Mac Miller Sets 2018 Tour Dates: Ticket Presale Code & On-Sale In...
Tickets Hip Hop J.I.D Mac Miller Thundercat
3
1978
Back to top
You must be logged in to upvote.
Registration and login will only work if you allow cookies. Please check your settings and try again.