Following lead single, "My Promise," Earth, Wind & Fire have released another new track from their upcoming album. "Sign On" has their classic sound, featuring high vocals backed by horns and a groovy beat. It ends with an a cappella choir repeating the chorus. The song is one of six that was co-written by frontman Philip Bailey's son, Philip D. Bailey. By the sound of these first two tastes of the new album, Now, Then & Forever should provide fans with the sound that made Earth, Wind & Fire so infectious when they started.

According to Philip Bailey, their long-awaited record has been two years in the making. They thought they were done last year, until they wrote "Guiding Lights." As he tells Billboard:

When we got finished with that song someone mentioned to me that it sounded like a great Earth, Wind & Fire that people had missed all these years. Then I started listening to the music we had done to that point, and the 'Guiding Lights' song made me re-think the music we had and I said, 'We've got to go back to the drawing board to make these other songs more classic sounding' and just changed the whole course of the album.

Bailey continues, describing how the album will have a sound more like that of their earlier work:

For so many years I've been all about, 'You gotta go forward, you gotta go forward. I finally had to buy into the fact that if I got a new Eagles music project and they sounded like Fleetwood Mac, I would be pretty pissed off, or if I bought a Stevie Wonder project and he sounded like Musiq Soulchild, I would be saying, 'What the heck is going on?' I had to really resolve in my mind that our music is that important to millions of people, and they really do expect Earth, Wind & Fire to sound like Earth, Wind & Fire -- and if you try too hard to go forward and lose who you are then you lose your base and you lose what's attractive to fans.

Now, Then & Forever will be their first without co-founding member and main songwriter, Maurice White. White was diagnosed with Parkinson's Disease in 1994, and although he was not able to be a part of this album, his influence is still present. Bailey says, "The ingredients we use for it to sound like Earth, Wind & Fire means it sounds the way Maurice has always intended for it to sound. So we've made a record that he's not necessarily a part of, physically, but is a part of from a morale standpoint. His intent, philosophically and musically, is something that we tried to make sure was a thread in this new project."

Now, Then & Forever will be out on September 10th. You can pre-order it on Earth, Wind & Fire's official website. It will feature 10 songs, including both "My Promise" and "Sign On." 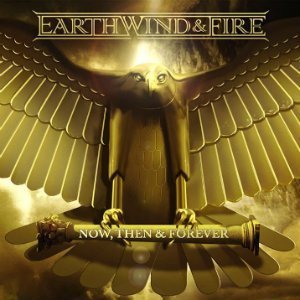